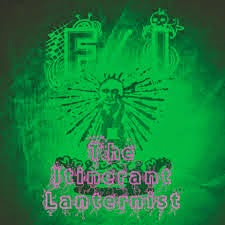 F/I are a Milwaukee, WI based band that have been releasing strange and cool psychedelic, electronic and space rock music since 1983. My friend Doug Walker (Alien Planetscapes) was very good friends with these guys and had all the old stuff and recorded me loads of their early electronic stuff and live gigs, so I have heard most of their material. It is actually quite a few of the same folks for the last many years keeping this going. The albu features 7 spaced out instrumental tracks with a lot of really cool guitar by Brian Wensing and Richard Franecki. Side A starts off with Fade to Orange. This has some hand drums, nice acoustic guitars, and freaky sounds to start this record off. OnOff is a sort of Hawkwind (blanga track) inspired track at least the way the guitar and bass are played in this one, letting the far out synth sounds be the most interesting stuff happening. A Medley of Kaleidoscopes ends side A. This track has a heavy bass line, some flute and some nice lead guitar (panned to the right side) and minimal drums and percussion (as they are mixed way to the back). This is a really great track with a long guitar solo section at the end. Side B starts with Fade to Purple, as short track with some cool layers of synths and a nice spacey wah guitar with minimal percussion but it quickly fades out after maybe 3 mins and into Gazing at the Nothing Box which starts with a freaky sounding synth, almost disturbing as it gradually gains it’s feet after a shaky start. This track is one of the more wild and intense with some highly effected guitar and synths that really get into your head. Far out.. Incense and Kerosene features Richard on the sitar and this track features some cool modular synths sounds as well and some nice bass playing. Keep the Third Eye Open finishes off this psychedelic record. This track sounds like it would fit in an old sci fi movie. If you like F/I you will dig this. If you have not heard them before and are curious and like strange instrumental guitar and synthesizer experiments try to give this a shot. This record pressed in only 200 copies and hand numbered so check out the web site as this is certain to be rare one day..