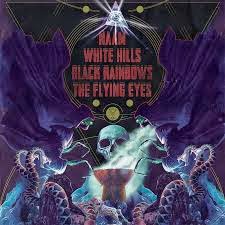 I finally got this in the mail. They had several colours and I managed to get one of the gold ones, which was made in only 70 copies and you also get the CD. All the bands except White Hills provide 2 songs per side. The total time for this release is only 50mins so some sides are pretty short. Naam starts things off with an ambient remix of their track Skyscraper from their album Vow. It is pretty psychedelic and spaced out. Thickening Web is a longer instrumental track that is really psychedelic with some good dynamics. White Hills is next with We’ve got Blood like you’ve Got Blood, one of the very oldest White Hills tracks from a rare CD-R but this is a new remix version with some instruments that were not on the original. I have most everything by White Hills but not this so I can’t tell how different this from the original. This track is a very psychedelic synthesizer drone track with some drums for 11mins. The original is 8 mins. Black Rainbows now bring the fucking rock back with Viper Tongue! Minor Monster Galaxy Message is a mostly instrumental track with some super cool guitar including slide and lots of delays and later some cool synths and effects. This is the best track on the record for sure. Awesome stuff. The Flying Eyes start off the last side with Golden Grey. This has a quite spacey guitar and organ, much more spacey than anything I had ever heard by these guys. Evil Little Leslie, borrows a bit of the riff from the classic Spoonful to make a dark, groovy, moody song.  This is a pretty cool record. If you are in the mood for laid back psychedelic space outs, go for the first record. If you want to hear some more rocking psychedelic stuff go for the 2nd record… A beautiful gatefold release..

http://heavypsychsoundsrecords.com
Posted by Scott aka. Dr. Space at 12:59 AM