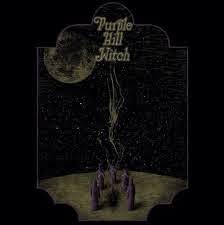 Purple Hill Witch are a young three piece band from Oslo, Norway. They have previously released a 7” picture disc on the Church Within label and now their debut full length record. I saw the band play a really cool set of traditional early 80’s NWOBHM inspired material so I looked forward to hear this record. The band played many of these songs at the show. Queen of the Hill starts things off with a slow groove that will remind you or either SLEEP (if you are really stoned) or Witchfinder General (Black Sabbath) if you remember the early 80s! These young kids really play well together and the long instrumental part in the middle is very cool with some repetitive stuff but also some cool guitar while still maintaining the intensity. Karmanjaka is a slower track but it has a nice guitar riff and he sings in a sort of hypnotic fashion. Astral Booze really reminds me of Witchfinder General, with both the vocals and guitar sound. The band played this one live as well and it includes a small wah bass part and also a good guitar break before returning to the stoney groove. Aldebaranian Voyage starts with an NIB like bass line and a nice guitar solo before the main riff kicks in. There are several short guitar solos in this cool instrumental track and great bass playing as well. Final Procession speeds things up again but keeps the sound and vibe totally in the early 80s. The Landing mixes up the pace a bit and Kristian plays a ripping solo. The title track and name of the band ends this album in a slow 80’s style doom but this is the most diverse song on the album with some spacey delay guitar and a harmonica section. Great song. The band really reminds me a lot of Witchfinder General (all the good things about the band) and occasionally throws in a bit of Angelwitch vibe. I think the band was really great live so for sure check them out and this album if you like the NWOBHM style of doomy music.

http://www.doom-dealer.de https://www.facebook.com/PurpleHillWitch
Posted by Scott aka. Dr. Space at 11:04 PM