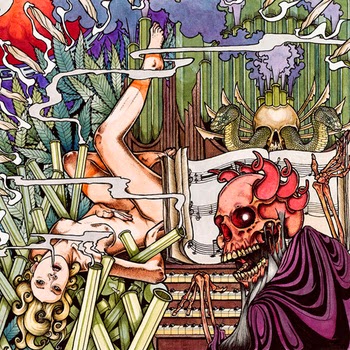 Dopelord are a polish stoner doom band. I recently caught there concert at the Heavy Days in Doomtown festival and it was one of my favourite bands this year. I managed to pick up their debut vinyl (got one of the last copies) and this new full length that they just released in April 2014. The band is a four piece with two guitars, bass and drums. This album features 5 tracks starting off with Addicted to Black Magick. “Come to the Sabbath” a bit cliché chorus but what the hell, as the mix of doom and stoner rock, in an excellent sound production, including some effects on the vocal here and there and a cool guitar solo. Next up is what I would call their tribute to Electric Wizard, Preacher Eletrick, which sounds exactly like EW, could even be a cover song and I just don’t know it. Great guitar solo in this song. Acid Trippin’ is next a very doomy track with some more fuzzy effected and spaced out guitar with slide. I love the really cool groove they get going at the end of this one. Green Plaque is by far the fastest track on the CD and it starts off with a cool bass line. This is probably the most psychedelic track as Mroka plays some very cool guitar parts as the rest of the band keep the very heavy vibe alive. Pass the Bong, ends this stoner worship record in fine fashion with a long track with good grooves. The stoners in the world will love this one.. Fire it up!