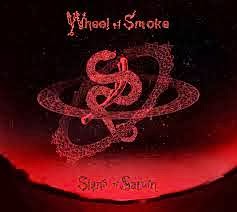 This quite cool Belgium band has released a new record on vinyl in 500 copies with a poster and a sticker and they are all hand numbered. I have number 338. There are quite a few guest vocalists and players adding horns, synths, and Fender Rhodes. The record has a wide range of diverse material on it and starts off with Sahara, which slowly fades in before the band kicks into an uptempo and intense song but then at the break it goes into a totally 70s section with horns and keyboards and the vocal style changes to this very laid back mood from a very powerful vocal before returning to the power of the start. Cool dynamics. Serpent is an very nice and melodic instrumental piece, which really picks up at the end. Salvation is the last track on side A, which has some very powerful lyrics ending with “chocked on materialism, forced only to see, we’re losing the power to be”.. I like that.. It starts with some very nice harmony guitars by Philip and Erik, before the heavy and slow riff kicks in and the vocals, which have a sort of nasty angry edge to them, to contrast the nice melody of the song. This track actually reminds me a bit a lot of the Finnish band, Amorphis. It ends with a long acoustic section. Flip the record over to hear Sands, which starts with a eastern flute with Fender Rhodes, section before an acoustic guitar section with a female spoken voice and as the rest of the band joins on this slow building piece. Cool song. The record ends in a very heavy fashion with the monster track, Song of Saturn. It has a very heavy riff to start but then really evolves in a unique way. This is a great record and not what I had expected at all. It is also released on a CD digipack, which I forgot to mention before.


http://wheelofsmoke.bandcamp.com http://www.wheelofsmoke.com
Posted by Scott aka. Dr. Space at 11:21 PM