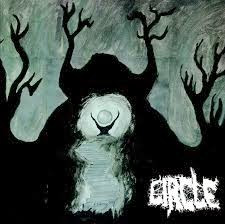 I am only writing this review as a warning to those who might buy it. THIS IS NOT CIRCLE FROM FINLAND! It is five Finnish musicians from the Death metal scene using the CIRCLE name and making psychedelic death metal. It actually has nothing to do with Circle except being released on the label. There are 5 tracks on the record. The title track starts with like 30 seconds of silence and then some very brutal death metal blast out to shock you. It has a very low fi production and strange feeling to it as it pummels you. The mid-section is totally mad with lots of tortured screams. Infamy has a more melodic start but then hits the road at breakneck speed. The end is totally crazy with some psychedelic guitar madness. Wow.. Crazy stuff. Transcending starts off side B with some solo drums before the heavy stuff kicks in. This is also some intense stuff with the vocals mixed more in the back and some spoken words as the music is generated in waves. Bloodstreams is a very short track and returns to the super fast intense death metal of the first track. Burden has a crazy guitar sound to start things off and then a deep bass starts a kind of hypnotic groove as it slowly gets more and more psyched out and intense. Crazy record..

http://www.circlefinland.com
Posted by Scott aka. Dr. Space at 10:50 PM