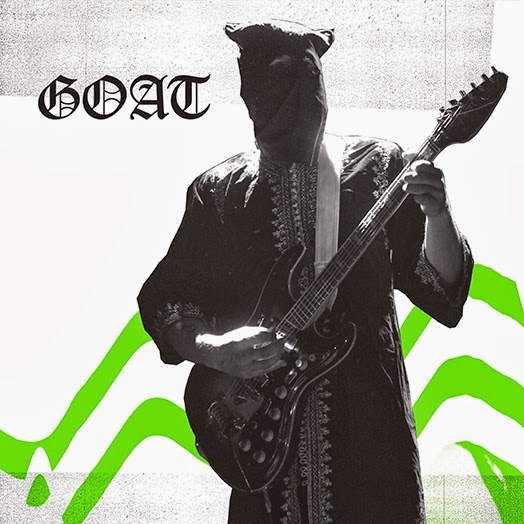 I quite liked the Goat record and thought I would give this double live album. Goat is a band from the Gothenburg Sweden area. This double live record, recorded at the Electric Ballroom, Camden, London features all the songs from the record and the two from the Dreambuilding 7”/12”. The record starts off with the instrumental Diarabi and while the band stretch it out a bit, that is almost all the jamming you get. The Golden Dawn is next and the guitar does an extended psyched out solo and then back to the main theme. Disco Fever is played very straight up with the hand drumming mixed quite up front as well as the afrobeat like guitar, with the vocals a bit further back in the mix. The guitar solo comes late. Stonegoat is very short and ends the side with another uptempo track and the intense female vocal. Sounds a bit like she is getting tired of screaming already though and it is early in the concert.. Side B features 4 songs starting with Let it Bleed, which is slower and more groovey and features the saxophone. I had never heard this track Dreambuilding and it is a bit more mainstream and dreamy and the vocal is more relaxed and not so much in your face. Cool drumming. The track Run to your Mama kicks up the heat again but I was a bit disappointed they did not do anything interesting in the mid-section, just a simple guitar riff and drumming (maybe there were some special dancers or something going on that we can’t see here..), when it could be some cooler guitar or something. Goathead ends the side with another quick track but with a cool wah solo at the end. Side C starts with a straightup version of Goatman and after some feedback from the end of that track, Goatlord is a very short and leads into the long spaced out  instrumental track, Det som aldrig Förandras- Kristallen den fina.  Some of this will remind you of the way Hills space out. Side D has the sole track, The Sun and The Moon (6mins). Again, I get the feeling there are a lot of dancers or something going on as they have this killer groove going but the guitar is not really going for it, he is really holding back most of the time.. If you are a fan you will dig this record for sure..


http://www.rocketrecordings.com  http://goatsweden.blogspot.dk/
Posted by Scott aka. Dr. Space at 10:36 PM