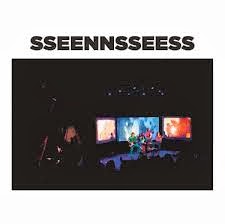 Circle are back with a new live record, featuring 4 tracks recorded live on Nov 22nd, 2013 as part of the Mika Taanila art exhibition in Helsinki. Kudos starts slow and building with a very beautiful melodic thread and keyboard line. Slowly the lead guitar starts to play and then Mika kicks in with some really unique Finnish vocals. He is singing in a bit different style than normal Circle. The keyboards play a major part in this 15mins song that slowly builds with short keyboard and guitar solo sections interspersed between the singing. It makes a few dramatic changes at several points into an almost jazz like theme. Radiant is the next piece on Side A and nearly 9 mins long. It has a melodic repetitive groove to start but then it sort of evolves into as the operatic vocal kicks in. Again, the keyboard is playing a major role in the sound on this track, creating the main melody but also padded space at times. This can only be Circle! Flip the record over and there are two 11 min songs starting with the Sleepwalker. It has a slow repeated theme as the guitars noodle, the vocals appear and go away over the course of the track as Mika gives an occasional shout. There is some sort of recorded talking also you hear now and then but maybe it from the audience or the art exhibit? Terminal brings back the intensity with a more heavy metal like riff but 80s Falcon like keyboards in another diverse track with some cool dual psychedelic guitar jamming. This was my favourite track on the record. Pretty cool record..