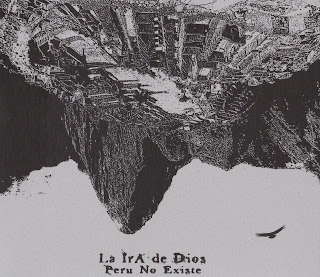 I have not really been too fond of the direction this band has taken after the first three brilliant records but I decided I would give this new one a chance. I can see it has many songs, which is not really a good sign for me. As always, nearly all the songs are sung in Spanish. The band is still a three piece although Xtian, who played on the first 3 records guests on the title track. Anyway, the record is a pretty intense uptempo psychedelic garage rock experience I would say, moving away from the space rock of the early days. Occassionally the band slows the pace a bit and there are some spacey effects mixed in like on Care and Trust (sung in English) and the very short Aparecidos, which has an almost reggae like skank riff and the ending track, El Apego. The title track is quite stoned and features acoustic guitar and Xtian making some electronic sounds like he did in the old days.  Flip the record over and kick into the high energy track Underground! It features some really spaced out effected vocals. The Unrest has a cool riff and spacey effect and is quite intense psychedelic stuff. Green Smoke is a more laid back and melodic track and really changes the vibe of the record. Grita goes back to the garage psych feel and is high energy.  It is more diverse than the last record but I still dig the first three way more. The vinyl comes in clear and black and it also has a nice insert with the lyrics and pics of the band.