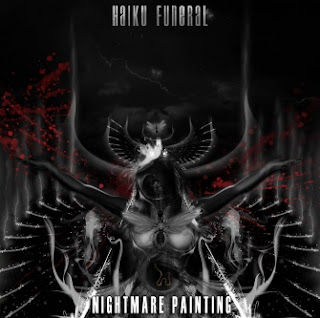 Haiku Funeral is back with their third scary as hell release just in time for Halloween. The lyrics are a bit more erotic, twisted and sometimes more evil and scary than before. The music is bass lines combined with some spaced out vocals mixed with a more normal spoken word voice (William) with some programmed drums and a lot of cool keyboards, sound effects, etc.. by Dimitar. Anyway, it is 10 tracks in 43mins so more focused and not as long tracks as in the past. The CD starts things off with a really spacey feel, deep bass, and whispered words at first. Blacklight Amniotic Erotica sung by William has really killer bass playing and the words are in a spoken word style. Then Dimitar comes in with the very evil voice and more spaced out sounds. Scorpion Ritual features some really intense bass playing and also drum (sampled) backed up by crazy stuff. Behemoth Rising slows things down some and again they share the vocals. The store that unfolds is far out, evil, disturbing. Raining Nightbirds is one of the longer tracks (6mins) and a really slow psychedelic track. The Flags of a new Empire Burn brings back the intensity. Death Poem is a short track which is followed by Heavy Breasted Innocence. This has a really groovy bass line that drives the track while Dimitar adds the necessary ambience. Your heart a black Tunnel has a spacey drone that starts as the drum track keeps a steady rhythm and William takes the first vocals. Spaced.. The last track, Damnation is sung in another language… very spacey this last track. A very difficult to describe band and totally unique. If you take the lyrics very serious it could damage your mental state and cause you to do terrible things. You have been warned… This would be pretty intense stuff for Roadburn.

http://www.haikufuneral.com http://www.aestheticdeath.com
Posted by Scott aka. Dr. Space at 10:52 PM