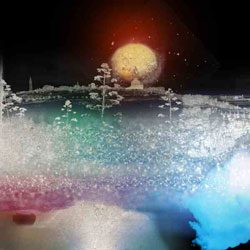 The band is back with more material that was recorded at the session they did with John McBain and was first released on the Smoke Drip release. This is the 3rd release that I have reviewed but the band this year! The A side opens up Nor’ easter, a slow stoney build up. It features a dual guitars with one playing the main heavy stoned riff and the other complimenting with some wah and effects guitar. Photos of Photos is next and with some spacey keyboards and drones as the guitars slowly come in a noodling grateful dead like way. It stays this way til the end. Flip the record over and crank it up and you can really feel the feedback as the main riff starts to take hold in Space Treader. The layers of guitars are quite psychedelic on this one as McBain really adds to the bands mix. A really cool synthesizer solo takes the lead towards the end of this jam as the riff dies out. Wingspan is a slow floating drone trip to end the side. Now to the 12”, the A side (The one that got away McBain remix) was a perfect space out for the opening of Sunday morning but wow, this B side track is probably one of the best things and the coolest guitar psychout that has ever appeared by this band. What an amazing cool jam on Pink Floyd's When you’re In (Live from Roadburn Festival) that makes this package all worth it. Really great stuff. I was there as well!

http://www.carltonmeltonmusic.com
Posted by Scott aka. Dr. Space at 4:53 AM