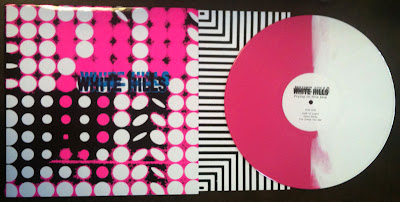 I was lucky enough to get one of the half pink half white first presses of this release. The band is back with another full length record and the songs-jams are a bit more uptempo with some killer fuzzed out space rock stuff. I think this is the best sound production they have ever had. The opening track has been on the net for a while and is called Path of Light and one of the most heavy and uptempo ones on the record with some killer fuzz wah lead solos as well. Robot Stomp is very Kraut inspired and has the same repeated bass and guitar line over and over with other sounds bubbling up from here and there. This one was totally killer live. What a cool track. This leads into the Dream you See, which I think they played in reverse order live. It has an intense fuzz phase guitar as the words are delivered in small packets before Dave lets it rip on the guitar.   Flip the pink/white record over and Song of Everything kicks in with full intensity with some more intense riffs and sounds and cool bass lines as well. They get totally spaced out with some bluesy guitar and floating wind and effected spoken words before the riff returns. Super cool song. I write a 1000 Letters is the last track.  A really different track with this like organ and fuzz guitar but a sort of dreamy drone element that pulls your attention somewhere else, while the fuzz guitar takes you the other way. I really like the new sound and feel of this record and the new drummer brings a new fresh energy. You really need to hear this one with headphones as there are layers of interesting sounds and things bubbling around that are really cool and a bit buried under the intense layers and riffs of guitar. It is a solid collection of songs that really translated great live!
http://www.thrilljockey.com
http://www.whitehills.com
Posted by Scott aka. Dr. Space at 10:48 PM