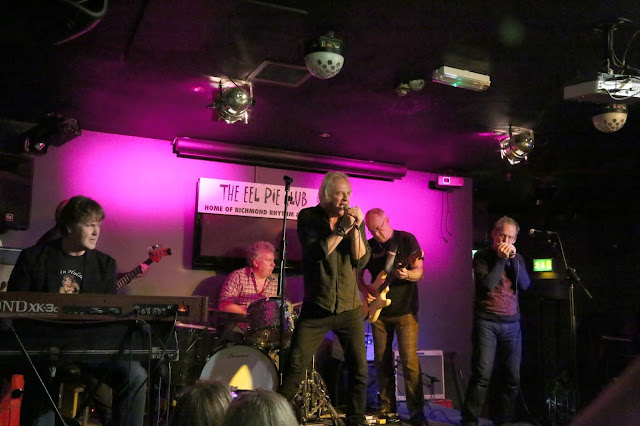 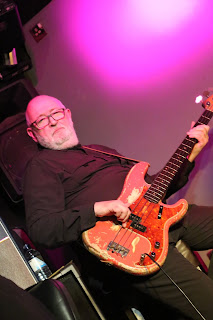 
It has been 5 years since Sue and I came to stay with my friend Silvana to see Pothead and interview the band. Berlin is usually quite cold in January so Sue decided not to come this time. Sure enough it is -2C and some snow on the ground. The Friday show is not sold out but the Saturday show is.  The band released the Jackpot album since the last time we saw them and Pottersville as well. I guess they will play some new songs and probably different sets each night. We will see.

Silvana and I arrived about 10mins before the show was to begin. She saw some of her friends and I ran into Helmut (Berlin Record Dealer). I had a foto pass so I could take some pictures during the first 3 songs. They were actually not caring so I could take anytime I wanted but I took mainly only shot from the first 3 songs. The stage was pretty cool and they had a few movies now and then. This was the first time for me to see them with the new drummer Robert. The band was all dressed in matching shiny suits. Brad’s was a bit too baggy and he looked like Andy Warhol in Charlie Chaplin pants with a Les Paul! It was a new fresh set from 5 years ago including some songs from the latest record, Jackpot and quite a few from Pottersville  as well but they went through the classics like Funkenbus, Henry and Mabel, I’m a Sinner (Which causes the lady next to me to cry), Black War, Chess, Indian Song, etc..  I just love this band. Great grooves, great songs… they were clearly having a really good time even though Jeff and Brad keep their distance, only crossing the front of the drum riser a few times. Biggest smiles were the small mistakes.. I think they played about 2hrs. The place was ¾ full. The show tomorrow night is sold out. 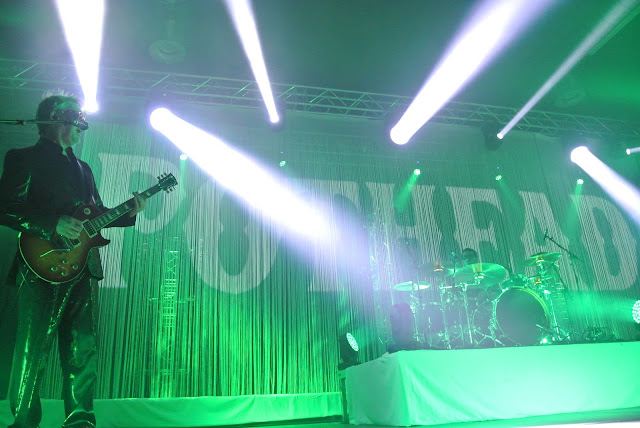 Approx. Set List (I have the list and it has 39 tracks but I know for sure they did not play all these in this order)

We hung out for a while and had a backstage pass to meet the band. There was about 25 people crammed into a small room and a lot of smoking. I could not hang out in there so stood in the hall way with the security guy waiting for them to come out. Siggi (their Manager) told me Jeff was in the hall so I went out and chatted with him after he finished talking with some fans.  We eventually got to the real backstage and I met Brad. We had a great time talking and he was in a super political mood, so we talked a lot about the USA and the election, etc..  At the end of the night we made a personal bet for 1€ to meet next year at this time to see who was right about the next president!   It was about 2:30 when Silvana and I left. She had hung out a lot with Markus and his girlfriend. Markus, played drums with Pothead many many years ago and has been a long term friend of the band.  It was a great night.. 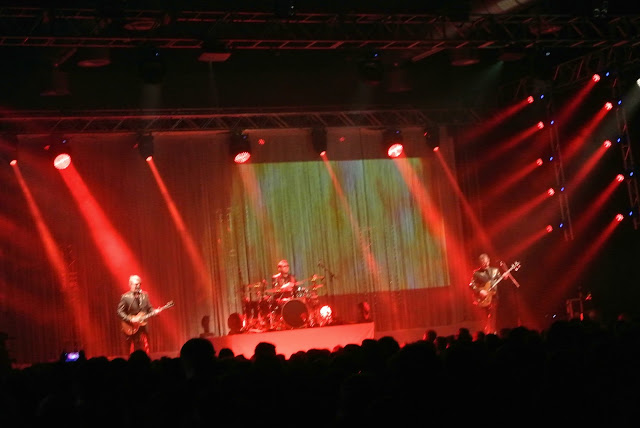 We arrived just into the concert and it was snowing a lot outside. The place was really full and much warmer than the night before. Brad and the guys looked the same and his voice was really great tonight.  The band played the same concert as the night before as far as I could tell except instead of ending with Indian Song, they came out and played two extra songs after Indian Song. Y Road was maybe one of them.  Anyway, we hung out and they were playing great classic rock through the PA, Stones, AC/DC, Golden Earring, ZZTop so there was still a party going on. I noticed Jeff just people watching from near the stage but behind the barrier so I went and chatted with him and then the owner of the Niagara bar, an old friend of the band (and Silvana also knows here well) came over. We talked about their new suits, etc..  Eventually we ended up at the backstage party, which seemed like fewer people on this night. I was able to get Brad to myself for about and hour and then Jeff came in and Robert the drummer) and then it was the whole band plus Silvana and Yvvone (?). Robert left pretty soon after, perhaps he could not follow the stoned conversation or did not find it very interesting. It was so fun to talk to these guys about the early history of the band (I want to write a book on them), their new studio, the band stating to do jam records,  the USA, marijuana, politics, religion.. Brad is quite well read but he also makes a lot of stuff up that is really far out, just to fuck with you (I hope)… a crazy storyteller….. what a blast.. We left at 3:30 in the morning…  So great to see the guys. Special thanks to Siggi their hard working manager. See you again next year...