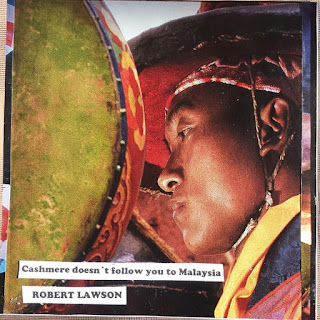 Rob Lawson is a multi-instrumentalist from the UK based in Spain. He has created over 150 CD-rs in the last 10 years or so. He took a break to do poetry and other projects but is back making music again. This is his 2nd CD of music created with his own homemade dulcimers.  The first one was featured shorter pieces but this new one is one long 50min improvisation (broken into 4) on dulcimer but using some effects pedals as well. It starts with a repeated theme until about 3:30 then it shifts to a lower volume and he starts to use some some effects and the intensity of the plucking of the starts to increase and he returns to a repeated theme. The track sort of comes to a stop at 9:05 and continues with a sort of almost Japanese eastern tuning or sound. This track is over 30mins and returns to more clean sound and then some effects here and there. Track 2 has this really cool effected sound, sort of wobbly and time stretching…. a bit trippy. Track 3 has fewer effects and sounds like there could be a 2nd layer recorded. There is also a light tapped drum like rhythm, perhaps he makes with his feet or hand. Track 4 features a drum machine, bass and guitar and is something totally different. The same repeated rhythm over and over for 2mins and then it sort of stops and he starts to play dulcimer again. That was a surprise!  These last 3 tracks are not on the band camp page for this release. I am not sure why.

The Nameless Wave is a long track, nearly 17mins and not a lot of effects. You can tell Rob is improving this playing of these homemade dulcimers. Braton Jig (with Slips) is a short 3 min track. Quite focused and some very nice playing and melodies. Maui Cave has some simple drums sounds like he is playing with something metal on the strings. The last track is called Bells and is, as you might expect a track with the sounds of bells.  Not sure how this one was made. Nice.

I don’t know if everyone is into listening to this sort of stuff but it is pretty interesting to hear at least once!!  If you are wondering about the title, Rob said it came to him in a dream.  Rob has started to put up his new but only one of his older musical output on bandcamp. Check it out..

Mushrooms and Moonboots by Gary Moonboot Masters (Self Published 2012) My friend Jerry Kranitz posted something about this book and being as I was a big fan of the Magic Mushroom band, I had to read this. It was published almost 10 years ago and Gary has retired to Australia with this family, and is no longer active in the music scene but what an activity did he have! This was a real down to earth read that really put you straight into what it was like to try to live off music back in the 80s (when it was actually possible for a few years, compared to today).  A lot of great inside info about the festival scene, growing up and raising your own family in small town England. All the amazing concerts he was able to see and be part of and of course details about the making of the Magic Mushroom band, their albums, the trials they had and also the successes.  Also, Gary was a part of the early line up of Australasia with Swordfish, who was a later member of the MMB band..  It was a great read and I highly recommend it. It is available from Amazon.
Posted by Scott aka. Dr. Space at 8:41 AM 1 comment: