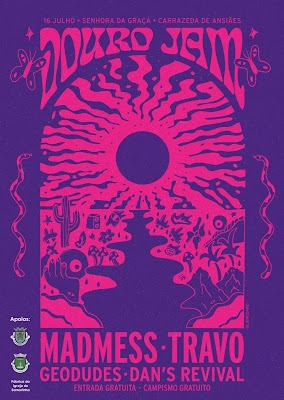 This was a free festival about 175km north from where I live in Portugal and featured 4 bands:

I arrived about 15:30. Sadly, the festival site had to be moved from the usual location down at the Douro River valley due to the high fire risks at this time and so many active fires. It was moved to a close by local down square.  When I got there the organiser (Nuno) and his crew were getting the food and drink area ready, setting up a few tables, etc..  I sat at a table with the Dan´s Revival guys and soon Travo was here as well.  Super nice people. Stage was up and the PA and mixing desk and they needed to do some cables but were more or less ready for bands to soundcheck.  I should mention it was insanely hot and the stage was right in the direct sun… 42C in the shade…

They wanted Madmess to soundcheck first (since we play last) and all bands were going to use more or less the same backline. Sadly, Madmess were really late and did not even arrive until 17 so the rest of the night was fucked up…  We finished soundcheck at 18 and went to the local pool for a swim (cost 1.5€) and that is just what we all needed. Travo showed up but they were closing in 10mins. We got an ice cream as well…  Felt a bit more refreshed.  We were very disappointed when we got back and no one had even stared playing yet…

After we split every band set up and took down their gear for a soundcheck so Dan´s Revival did not even start until 21!!  2.5hrs late….  I was very unhappy as it is just too late for me and no one seem to be in any kind of hurry. They had hoped to be done with the live bands at midnight but had a permit until 0200..

Anyway, Dan´s Revival were a guitar (also sings) and drums duo playing dirty, nasty, sometimes hard rocking blues rock type stuff…. They need a bass player or at least a guitar run thru a bass cab to give the sound some more balls… They played 30mins or so.

GeoDudes were a PT quartet of bass, drums, keys and a guy from Brazil who played flute and saxophone. They stared off with very traditional jazz quartet stuff. They all play very well but it was nothing original at all. I filmed some of this. Sadly, I should have filmed the last 20mins or so as it was great and more funky and jamming.. Cool band and nice guys…

I was really looking forward to seeing Travo as I dig their latest CD a lot and I had spent half the day talking with the guys and they were all super nice….  They had a horrible sound to start. Only bass and drums, no guitars…..  It took the soundman some strong words from the bands friends to sort out the sound but in the end it was sounding great but not for the first few songs. Also, in the middle of the set, the drummer put a hole in the kick drum. They tried to duct tape this and it held for the rest of their set but was not looking good..

Madmess, we started at 00:30, fucking late. They started off the set and played 2-3 songs and then I joined in on the last 3 and then we had a jam. I think we played for 80mins about including the breakdown in the middle of the kick drum again. I dig playing with these guys.  We had some great comments from Travo and the fans of how well I fit in with the guys to add a new psychedelic dimension to what they do. They especially liked the last 20min jam… It was fun but was so tired. IT was 42C on this day.
A fun time and the party was still going on at 0300 when I tried to find somewhere to sleep.  I had put my sleeping bag and mattress out under a tree in what was called the camping area on the other side of the library building. Only 4 other people had planned to sleep there but it turns out fucking sprinklers came on and my sleeping bag was soaked completely so now I was left to sleep in the fucking car…. Nightmare.  Slept 2hrs and drove home at 7 in the morning.. Fucking wrecked but it was fun… too old for this shit… Thanks to Nuno for putting this on. Maybe Doctors of Space can play next year. Peace. 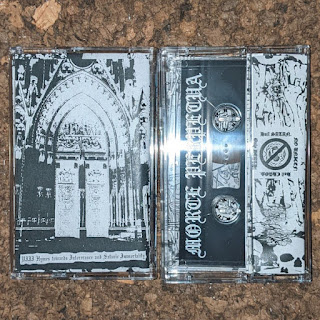 Some Dutch friends of ours have a son and he plays on this release. He gave me a copy of the split tape release.  Thomas also made the artwork, which is real old school DIY stuff but pretty cool and very satanic…  As for the music, it is starts off with Injuria, slow with some intense vocals then the drums really kick it up a notch and the vocals get more evil and twisted..  Pretty far out….. I am not really into this black metal stuff at all and I have a hard time hearing anything new in it but this is like old school Venom vibe but with a more raw production and more crazy vocal.. Intense and raw with a lot of energy…. the singer for sure suffers for his art!!  Side B is Morte Perpetua is a more raw production, faster but with a similar style of vocal. Brutal.. that is all I can say.

This is real underground black metal stuff from Portugal.. No idea how many copies this tape is made in but I guess less than 100!! Released in Feb 2022..  They have no bandcamp site or anything that I could find.

Interview with IT was the ELF (PT Stoner Rock) 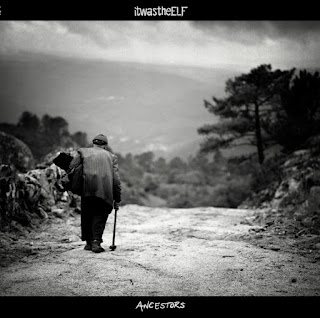 In January 2022, I met up and had a jam with the cool Portuguese band, It was the Elf, from Gouveia, in Central Portugal. I had been corresponding with Vasco, the guitar player in the band for some time and it all finally came together after covid had died down.  I reviewed their great new album, Ancestors, earlier this year.. Anyway, give this a listen if you want to learn a bit more about the band. Enjoy.... 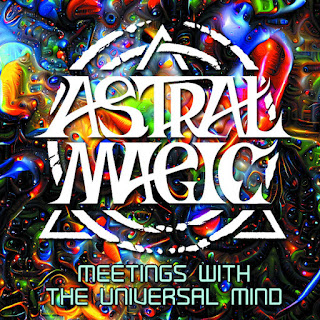 Astral Magic (Santtu Laakso) is a very prolific Finnish musician and this is his 24th release (according to Discogs) and it is a compilation cassette tape that comes with a full colour magazine and features music that had only previously been released in a digital form from the first 4 bandcamp releases from 2020-21.  77 mins!!  While Santtu plays most of the instruments, Jonathan Segel, who has contributed guitar, violin and other instruments on nearly half of Santtu¨s releases plays on 3 tracks. Peter Bingham is on track A7 but the rest is Santtu.

The 12 page zine is super cool graphics. The mag starts with a page about the release and ethos of the magazine. Page 2 is Santtu writing about the project, the ethos, the experiment, styles and coconspirators… Page 4 and 5 Santtu goes through all the tracks on the compilation in detail. Page 6 and 7 features myself and Jonthan Segel writing about Santtu and Astral Magic. A personal view. The last 5 pages of the mag is a detailed discography, which incredibly impressive when you think that all of this material has come out in the last 3 years.. Release 25 is already out as well and called Alien Visitations, on cassette on the Noiseagonymayhem Records label out of Canada. 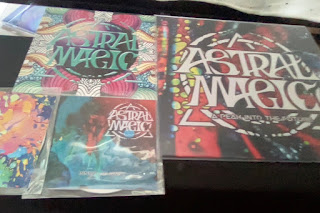 Anyway, if you are a fan of psychedelic space rock music, it is well worth checking out Astral Magic. What to recommend???  I really dig Visions of Infinity (of course, I mixed it and these songs really got into my head!), Mists of Orion, and Lords of Space….. 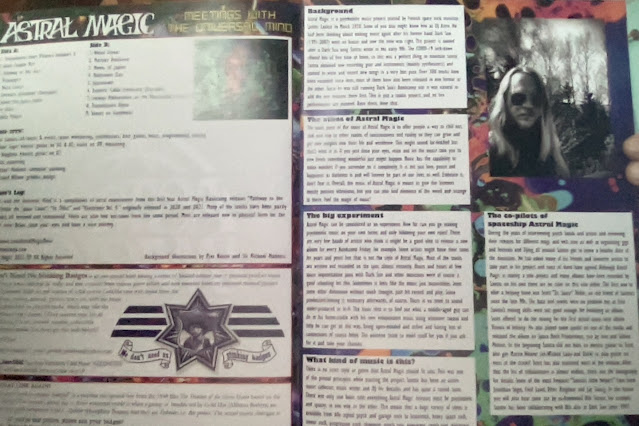