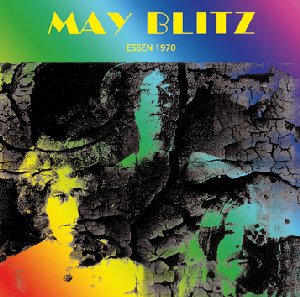 Wow.. this totally caught me by surprise. I had just downloaded a couple of live May Blitz shows from Dimeadozen and they were great so I was totally psyched to get this. Side A starts with Tomorrow may Come and it fades in part way into the song and the sound is a bit rough at first but then it sounds great. Fire Queen starts off with a sort of like jam, drum solo then they blast you with the heavy riffing and then back into a drum harmonica jam and back out into the song. Wow…. It is only 5mins long on the LP. This one lasts nearly 20mins. Side B starts off with Squeet also from the 1970 self titled record. This has an almost funky groove to it. Then it goes shortly into a slow bluesy solo and then heavy riffing kicks in and they are really pounding it and then he just rips it up with some wild soloing.. 8 Mad Grim Nits starts off with some siren sounds and then they really get into the track starting off with solos before the singing (sort of..) I don’t know ends the record. It really is a slow heavy blues track after 4 really intense tracks. It feels like a strange track to end the show but maybe it was not the end?

These guys must have totally blown people away. You can hear and feel just how loud and intense it was this concert. The recording is raw but really gives you that sense you are in the hall checking the band out and getting your mind blown! It also comes in a great gatefold sleeve with a very nice long detailed full color multipage insert about the band. Super nice… A must have if you like May Blitz.