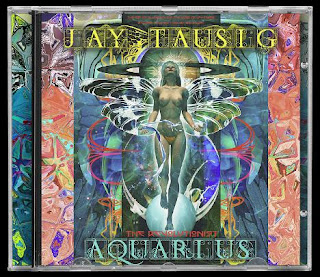 Jay Tausing is a progressive rock instrumentalist. I first heard his music on some of the cool Fruits der Mer cover band compilation records (Great version of Thick as a Brick!). I believe Jay plays all the instruments on this record. It starts with a spoken word piece by a female spoken voice. It is followed by 13 cool and spacey instrumental tracks which features a wide range of instruments including flute, hand drums, guitars, bass, a variety of synthesizers, sitar, and more. The music is primarily lead by his very nice lead guitar work with cool l´floating layers of synthesizers. Uranus really shows off his multi-instrumental talents with nice flute playing, glissando-e-bow guitar, synths solos, a mix of drums and hand drums. Water Bearer has an Eastern Theme to it. The Elventh Hour s a short 3 min track but has a more heavy guitar sound but still spacey. The Amethyst kicks in with another heavy guitar rife with some cool spacey elements. The Revolutionist really takes the complex bass and drum and guitar parts to a new level on this record. Some really intense interplay to start and then it starts to float a bit with some of those voice style keyboard lines and then a very nice melodic solo. A brilliant number. Mystic Crystal Revelation returns with a more spacey theme with a cool synth drone, panned guitar. Actually the whole record sounds excellent in the headphones is very nicely produced. Super cool track. Anyway, this is a damn cool CD release if you are into instrumental, psychedelic space rock type music. My only complaint is such a great effort is put together by one guy to make a record like this that will never be performed live. Cool stuff.. keep it up Jay….
He plans another full length release in 2012, "Delirium" on Mellow Records out of . He has teamed with Ed Unitsky, who provides the art for "Aquarius" and the other 11 solo instrumental records, which follow and combine for a "Trip Around the Sun" package, to be released each month during 2012. Ambitious.

JayTausig.com
http://www.thetriparoundthesun.com/
Posted by Scott aka. Dr. Space at 9:11 AM