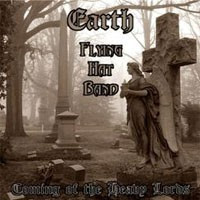 This is a very interesting release and I am still not sure how official this is. I am pretty sure that neither the members in Earth or Flying Hat band sanctioned this release and this is some sort of underground bootleg since there is no web site for this label. Anyway, these Earth demos that small under 1min samples have been on the net, at least 2 of these tracks can now be heard, even though both don’t sound complete either and strangely, Song for Jim is not here. Anyway, this pre-Black Sabbath band Earth, were a blues band. The Rebel (2:46) is a decent blues rock track. While When I came Down I like much better but it is even shorter, under 2mins but Iommi plays some cool guitar and the riff is heavy. Early One Morning is live from some small club and a blues track (4:43) with so so sound quality. The side ends with Blues Suede shoes probably from the Beat Club 1970. I did not compare it but is sounds like it. A bit disappointing this side as these sources are not anywhere close to the original sources, I don’t believe. I would not really recommend this except for hard core early Black Sabbath fans.

The Flying Hat band, I had this demo from 1973 for many years and these are the same tracks but they sound a bit cleaned up. For those that don’t know this was the band that Glenn Tipton played in prior to joining Judas Priest. In 1974, the band supposedly recorded a full length record for Vertigo that was never released. Tipton does rip it up especially on the great Reaching for the Stars track, which reminds me of the Danish band, Hurdy Gurdy. Lost time is an acoustic track. Coming of the Lord is nearly 7mins and by far the longest track on this record. It features some long dual guitar solos in each channel, even though the band is a three piece. Cool stuff.