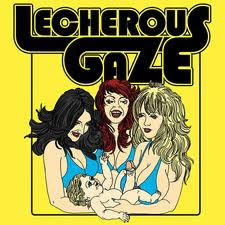 This is the Lecherous Gaze new release after or maybe before the split LP with Earthless and Danava. It features 4 short tracks playing on 45 rpm.  You have to love the back cover photo, with the band give you the “gaze”. Phaze is an uptempo rocker. It is a pretty ordinary but strange rocker with hand clapping at the end but a great guitar solo in the middle. The singer Lakis has a strange deep voice you have to get used to. Sold is a better track with a hard rocking groove and some nice guitar. It slows down and is a bit blues at one point as well. Grave starts off the side called Tee Pee side. It is a slower track to start but then the band really rock out but in a strange off kilter way. R ‘n’ R Lust is a straight up rock and roll song, done LG style, which is really different but still rocking! Strange tracks these guys make but I like them! They must do some crazy shows if they jam these tracks out a bit.

http://www.lecherousgaze.com http://www.teepeerecords.com
Posted by Scott aka. Dr. Space at 9:53 AM