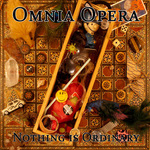 Wow.. Omnia Opera are back with a new CD after 16 years! Second Skin, the 2nd track on this CD was from the band lead by the lead guitarist Rob Lloyd, who made a couple of cassette releases called Omnia after Omnia Opera split up in the 90s. This is self produced and released in a really nice double gatefold digipack with really cool psychedelic collages on the inside and also on the CD sleeves. There is also a large booklet with all the lyrics and a band picture collage. Great package. There is 2hrs of space rock on these 2 CDs in 18 tracks. Some of the tracks really blow me away like Nothing is Ordinary and Big Brother! Liquid Underground has a real GONG feeling at times and Pictures on the News is a more uptempo space rock track with a great bass line. The ambient pieces that tie the more rocking stuff are also really cool. This is a very impressive return to form for a band I thought was long gone. For sure one of my favorites this year, being the old space rocker that I am.