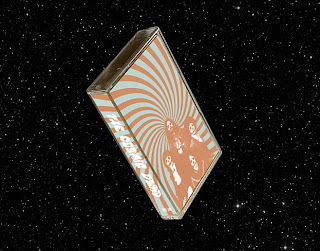 The Cosmic Dead are a new psychedelic rock band from . This cassette and download only release came out this summer on the Who can you Trust cassette label, which had also released the White Hill NYC Radio sessions tape, that I reviewed some time back. Anyway, this is pretty long, nearly 80mins and only 3 songs (jams) of pretty cosmic stuff. IT has a decent but not super high fi sound but the old school early 70s Hawkwind vibe is alive and well as the band jam along with max blanga and nice spaced out sounds. The more I listen to the tape, the more I dig it! Fans of old Hawkwind will be happy with this new band. The Black Rabbit is 14 mins long a very cool heavy spaced out instrumental jam, this if followed Spice Melange Spectrum is a bit shorter at 6 mins and clearly recorded at a different place as the sound quality changes and is not as good but still has a heavy spaced out wall of sound. Infinite death of the Godhead is the major long track on this side of the tape and again has a different sound quality with much clearer sound and drums and a less intense vibe as the band takes some time to build this one up. Side B is the Father Sky Mother earth track that lasts over 30 mins and really blew my mind. A really cool new band.