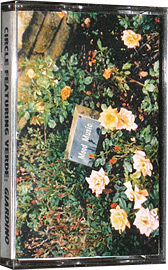 This music was recorded some years ago when Finnish modular synthesizer guru joined Circle for a weekend or so in 2007… This is a cassette only release made in 100 copies. I have number 85.  Sadly, I missed out on the other Circle cassette this year. Damn.. Feel free to contact me if you have an extra one. Circle and Verde made a CD together some years ago as well called Tower. Anyway, what about this tape? Side A is a 23min piece called Plante del Sud. This is a very strange track especially to start with and the weird vocals over the drone, sometimes quite intense and baby screams also and then the last 10 mins or so the organ is very dominant and someone playing cymbals in the background gives it a weird feeling, like really bizarre carnival music for deranged midget cab drivers. The track ends with some feedback and the starting drone becomes present again as it fades out. Side B is the 20min track entitled Plante nordiche. It starts with some synthesizer drones and sounds and then drums come in that are played very slow with mainly just kick drum and one cymbal repeated but the number of beats and hits is changing. Slowly more layers of strange sound layer in over the original drones and then some droney voices are mixed in making it very far out like something from a strange film.

Http://www.circlefinland.com
Posted by Scott aka. Dr. Space at 9:41 AM