Kiss the Right side of your Brain: A Tribute to Monster Magnet (Monster Fuzz RecordsMMT-01-500) 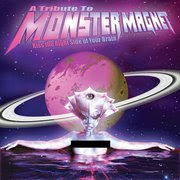 I am pretty sure this is the first full length tribute to Monster Magnet and quite an obscure bunch of groups as the only one I had ever heard of was Drunken Gunmen. There are 14 covers in 73 mins and if you are a fan of Monster Magnet you will either hate this or think it is pretty cool; Probably not a lot of middle ground. About half the bands play the songs very close to the Monster Magnet version and these are not that interesting at all while others really try to do something different and some are more successful that others but most are cool. The CD starts with Acid FM and their take on Twin Earth (they also later cover Nod Scene) and both are very straight and musically just like the originals. Wormwood Earth covers Dopes to Infinity nearly identical to the original and not very interesting. Lady Perpetua’s Cosmic Circus (great name!) covers Look to your orb for the Answer and later Tractor. What makes this a little unique is female lead vocal but musically it is boring. They psych out a bit as you have to on Look to the Orb but just too close to the originals. The CD first gets interesting with Black Promises which do a killer version of Monolithic. The guitar is much heavier than on the original and the vocals and attitude shine through to compliment this heavier version. Greg Majka do a pretty cool more laid back and organ driven version of Head’s explode. Sicko’s Zero take on Kings of Mars, also in a more laid back way. Drunken Gunmen do a really far out version of Cyclops Revolution (one of my all time fave MM tracks). The vocals are spaced out big time. Later they also do Zodiac Lung with spaced out vocals, while musically the song is pretty close but much more low fi sounding. Smoking Bird do a super cool version of God Says NO, which with the next track, D’anglerz take of Big GOD are the highlights of the CD for sure. The sound production on this is also the best on the record. Forgotten Galaxy take on Superjudge and this is pretty cool as they really do some different guitar stuff and great solos while keeping a good part of the song the same. Red Infinity perform Space Lord and again, just too close to the original so not that interesting at all. Sparky, the guy who put out this cool compilation also plays in 6 of the 11 groups! One thing you really realize after you hear this CD is how great a singer Dave Wyndorff is.. A mixed bag of a CD but some amazing versions.

http://www.monsterfuzzrecords.com
Posted by Scott aka. Dr. Space at 9:51 AM