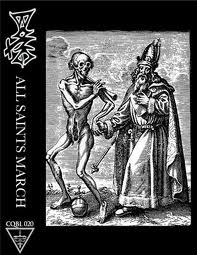 Bong have a new cassette only release on the Brave Saviors label. It is limited to only 100 copies. Each side is a long track from the bands latest record, Beyond Ancient Space. Side A is a really cool version of Across the Timestream recorded live at the 13th Note in (2010 or 2011). It starts off with some really cool spaced out guitar stuff and the band are improvising a bit before heading into the main song. Great version and some of the best audience recording sounds of the BONG live releases. The B side was recorded at the Fish Tank in (2010 or 2011) and this version is not greatly different from other versions I have heard but still very heavy, very stoned and doomy.. A great band.. Contact for availability : beyondtherim@hotmail.co.uk

http://www.myspace.com/landbong
Posted by Scott aka. Dr. Space at 9:38 AM