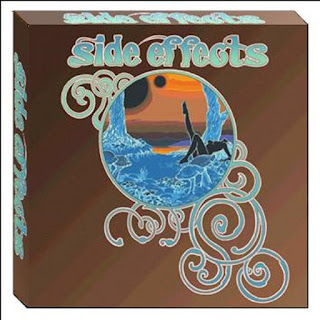 Fruits de Mer never shy away from ambitious and large projects and this box set featuring one song per side by 8 bands over 4 LPs in an elegant box…. There are some really cool covers here starting off with The Soft Bomb’s take on Echoes by Pink Floyd. They are pretty true to the original but take a step further to make it more psychedelic and faster tempo! Arcade Messiah take on the Aphrodite’s Child track, Four Horsemen. Very spacey and nice. For most people it will be the first time to hear the full 22min version of China, an old Electric Sandwich track covered by the Bevis Frond. This was released in a shorter 9min version previously by the label and features a lot of guitar with Nick and Bari! Wreaths do Sundown by Gordon Lightfoot. I don’t know the original but I am sure this is a quite far out take..  I love the Finnish band Superfjord and they really space out with CTA-102 by the Byrds!

The Luck of Eden Hall go for Starship Trooper by YES…. now dedicated to Chris Squire, whom we recently lost.. Very true to the original but some really cool dual guitar soloing going on in the jam section. Julie’s Haircut surprise us with a take on a couple of Mile Davis tracks (Shhh/Peaceful). Peaceful and floating. Sendelica freak us all out with I feel Love by Donna Summer that you would never recognise. Totally spaced out to start and then…. well you will find out..  I love the Kingston Wall version but am not sure about this one. Every track is a really long jammed out version with the shortest side being 16 mins!  Amazing collection of songs.. I love this release..