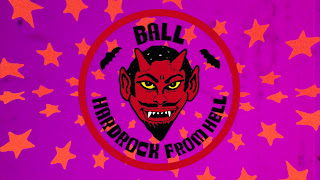 Ball is a mutant off-shoot of the Swedish band Skogen Brinner and is apparently 3 brothers. This debut 7” features 2 tracks. The first on called Fyre Balls is a 2 1/2 min track which sounds like a short psychedelic jam with some keyboards and a raw nasty fuzzed out guitar. Cool song. The video for 'Fyre Balls' will debut on www.shindig-magazine.com on Tuesday July 16th.

Fyre is 8 mins and features some vocals and intense guitar and great rock groove. A nasty band but good fun psychedelic rock and roll with some bursts of cool guitar parts.  Might remind me of Santa Cruz (Orange Sunshine side group). A promising new band if you like psychedelic rock with a lot of guitar and I do.


http://subliminalsounds.se
Posted by Scott aka. Dr. Space at 10:38 PM