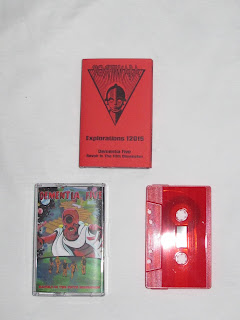 This is a very cool limited edition (100 copies) cassette release from my friend Danny and his friends of the Yoshiwara Collective in Ireland.  This is not a totally new band (they have been playing around Portland, ME since at least 2011) and features the drummer (and his wife on vocals) and guitarist from Ogre! The music has some similarity to Ogre but features a lot of organ (Gina Brown) and reminds me a bit of Glitter Wizard at times. The first track is called Revolt in the 5th Dimension and it gets up and going quite quickly and really rocks. Later it slows down for a nice wah wah guitar solo section Magic Man is simply a kick ass high energy rock track with some ripping guitar work by Ross.
What a killer track. Path of Decay is a more laid back melodic track with some nice organ and guitar but some intense drumming before the killer riff kicks in. Reminds me a lot of Glitter Wizard but not as funny lyrics or sense of humour. Lots of nice organ playing on this one as well. Flip the tape over for Crossroads of Indifference. This is a slower one and a bit more psychedelic with some in your face organ but a heavy riff in the background. IT turns into a quite happy almost party tune.. A catchy one… All the way Around is the most doomy track and less organ and a focus on the heavy guitar riff and a great psyched out guitar solo… Fantastic track. Dementia ends this tape.. I guess it was about 30mins of music..    This last track starts off with a bass line and then the rest of the band joins in for one last blast with a long jam in it. Great tape….


http://www.yoshiwaracollective.co.uk
Posted by Scott aka. Dr. Space at 10:47 PM