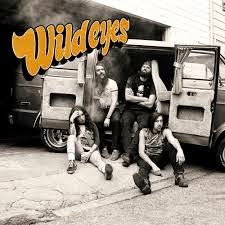 Wild Eyes are a totally rocking band from San Francisco featuring the bass player from the great Djenghis Khan. They are fronted by a powerful female singer. This EP features 5 tracks in about 25mins and is the bands 2nd release. Stiff Nites starts things off in a rocking way and at high speed as this four piece really belt it out with some great guitar solos and energy as well. Snakey Lady has a really cool guitar sound and killer bass groove as Miss Gonzales belts out the vocals. The mid section the drummer is really awesome and I like the way they make the most out jamming in a short 4½min track. Give you Plenty Lovin’ ends side A with the same energy as the first 2 tracks a bit of psychedelic effect on the voice. The last two tracks are 7½ mins or so each and feature Doug from Glitter Wizard on keyboards. The Freak starts things off and takes things down a lot for a more laid back bluesy, stoney track with some nice organ. Around 2mins the emotional energy raises and then into a nice guitar section. Great song… Alabaster Dream/hewn Runes is the last track and a mid-paced one with a cool funky vibe in the 2nd half. I really like this band a lot and it is a pity they did not make it this far north on their European tour.  Cool band.


https://www.facebook.com/WildEyesSF
Posted by Scott aka. Dr. Space at 8:45 AM