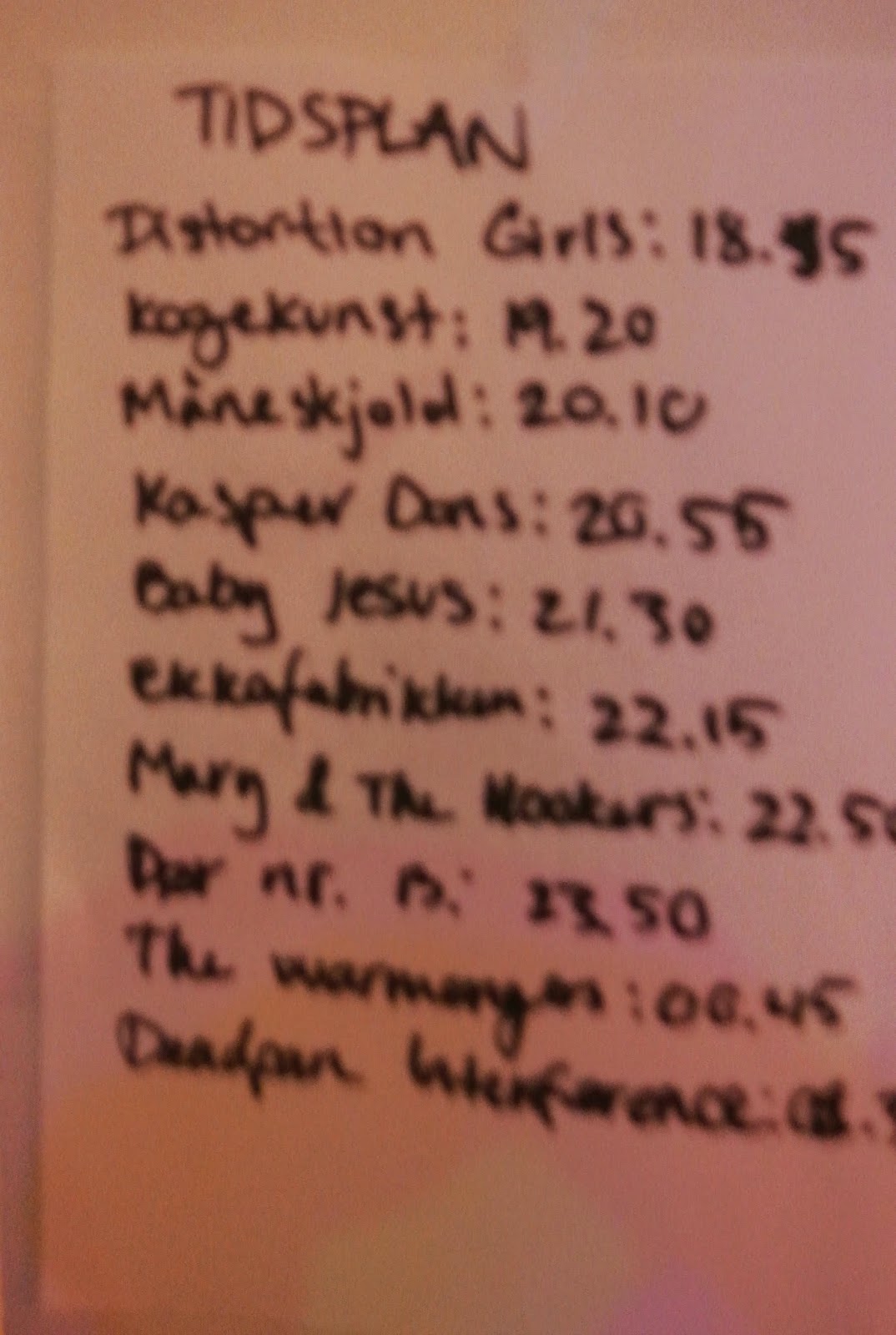 This was sort of a CPH psych fest 2015 pre-arrangement to get people in touch with the scene, the people, the bands and to promote the festival for Sept 2015. I arrived early as the Danish band, Fritbyttedrømme were also having a 7” release party from 16-18 with their band leader, Lau, playing a few solo songs. I had never been to this place before and they had done some decoration to make it a bit cooler as it was a cold white, long skinny place with two places for live music and a bar-kitchen area.  Set up like a youth club or something. A bit cold.. Anyway, I met up with Lone and Hugo (a Bolivan guy living and going to school in Malmö). There was about 50 people for the release party and the crowd inside the club would rarely get much more than this over the entire night, despite 387 people saying they would come on Facebook!  Anyway, I knew some people and Jan Snerum from the Danish Radio was there and we had just done a radio interview a few days ago that will broadcast today (Sunday Dec 14th at 18-20 (GMT+1).

Lau played one song on electric guitar and then the next was just fantastic and involved many layers of guitar and space sound and the tambourine player and back up singer from the band also joined. It was about 20mins but cool… I got the 7” record and you can read the review soon. Lone, Hugo and I went out to eat at Kebabbish just down the road and came back in time to catch the first act at 18:15, Distortion Girls. I had seen this three piece before in Malmö at an art gallery and they were really interesting. They have a male organ player, a female singer (poet) and a female guitar player who also triggers the sampled bass and other sounds that they play along with. Tonight they had some really cool movies projected on the wall that they also appear in some of them. I thought they were brilliant. It is a hard sound to describe but noisy, puts you on edge and is sort of druggy.. Cool stuff..

Next up is the duo that calls themselves Kongekunst. I saw them at last year’s CPH Psych fest and it was a highlight for sure. These guys are highly original and just totally far out. They torture their guitars, pound their drums, drone their synths, do strange things to horns and just totally captivate you with their passion and energy. I can’t imagine listening to it at home but live, they are amazing. The show was a bit to short and they ended on a sort of mellow track for them, so I was left really wanting more. Still cool to see them. Not many people around, still only 40-50 people and remember there are 10 acts a lot of volunteers so maybe 20 paid people??  I should also say it was really cool that they had some liquid oil projection visuals done by Kasper Dons (Danske Spor) and what looked like could be his father. Great work guys. It makes such a difference to have some visuals.

Måneskjold (Moon Shield) was next and one of the best acts of the entire night. Kasper, the arranger of this event, played guitar and spacey effects in the band and he is joined by bass, drums and two guitars, although Rasmus, the singer, sometimes only sings and does not play guitar. They play a really cool psychedelic space rock with a punky attitude and edge and the interaction between the guitar players is really cool… Great band. They will make their new release next year..

Danske Spor (Danish tape or track) is normally a guy named Kasper Dons, playing acoustic tracks with very simple guitar chords. He is very passionate but I was not really grabbed by it. It is all sung in Danish. Today he was backed by the Kongeunst guys which added another whole layer and made it more interesting. Most people were just taking away as they usually do in Denmark and not paying much attention. He played about 25mins I think..

Now it was back to the larger hall for the band Baby Jesus. They also played at last years Psych Festival. This was the most people of the entire night as there was probably about 60 people watching the band as they played a really strong set of 60s rock and roll. They have a great sound and play very well together and sound very authentic. There are a lot of these Danish bands that are really good at coping the sound or feel of other bands and they are much less good at creating something original… Anyway, the band powered through their 30min set and rocked the place. Great energy and songs.
Echofabrikken was a totally new band for me and this will for sure be the last time I see them. I have no idea how or why they were on the bill? It was like some sort of Danish radio pop with a bit of post rock spaceyness sometimes but I hated the pop singing and this had nothing to do with psychedelic music. 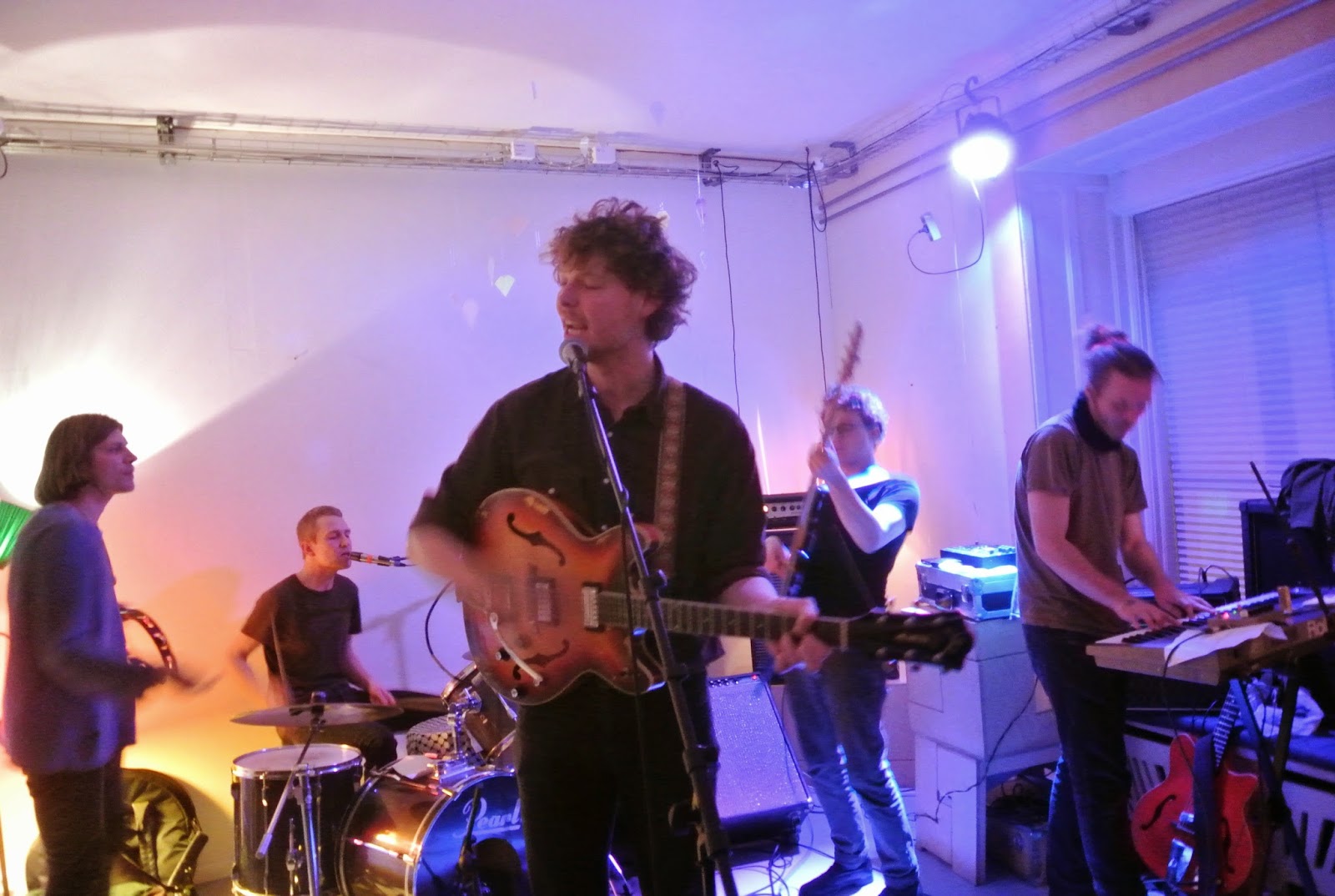 Mary and the Hookers was also a new band for me and I quite enjoyed their set of Spiritualized- Spaceman 3 (the more mainstream) druggy vibe. All their songs sounded a like with the same sort of vibe with the guitar player on the left making some more interesting sounds and using a violin bow at times, and effects. The singer also played guitar and they had one other guitar as well who did some solos but very unoriginal ones.. I don’t think people liked them much though as the crowd was down to about 30 when they finished.

The last act I saw was Dør nr 13 (Door number 13). This started off with one guy playing guitar and harmonica, ala Bob Dylan and singing a quite political song that got some response from the small crowd. Lorenzo Woodrose was here now and Anders Stubb (Anders, On Trial) as well. Some old friends! He was joined with a drummer and bass player for the next tracks and this was more interesting and more rocking but not really psychedelic. Not bad though…. I was tired now so I missed the last two bands, The Warmongers and Deadpan Interference.

Overall, I have to say it was a bit disappointing. Most of the bands were the same that played the Psych fest earlier this year and considering I was there for 7 hrs I did not really see a single act that really blew me away or did stuff so original besides Kongekunst and Distrotion Girls. I really hope Kasper can pull together a more impressive line up for the real festival and next pre-event in April. The event ran pretty smooth considering the sound in both rooms was difficult; there was no professional sound or light people. Still a nice evening as I could hang out with cool people.