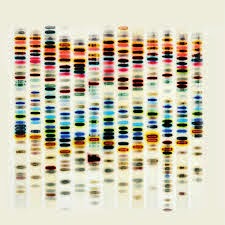 It has been some years since I heard a new ST37 record. These guys have been around for a long time now and just keep doing their own thing. The band has released material on lots of labels but this is the biggest for them, signing with Cleopatra out of California. This track has some cool artwork on the inside by my friend Chrstian Mumford (lives in Norway). The CD features 12 tracks in about an hour and starts with a strange intro and then busts right into Down on Us, which is quite psychedelic with two very different guitars split far out to the left and right channels and bass drums and vocals in the middle. Some electronics flow in and out here and there. The entire record is a pretty trippy adventure in sound, strange vocals and lots of cool guitar parts. You have to love the song titles like Odd Ass Silence, Eroica Horns, Magnetic Amphibian hydrated Gills and The pit out Back! There are quite a few guests on the record mainly adding horns here and there on some tracks. Anyway, this is a really trippy record. Glad the band hasn’t gone mainstream! Enjoy…..