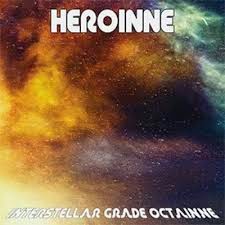 Heroinne is a new band from Trondheim Norway playing some nasty stoner rock music that really gets under your skin and reminds me of Church of Misery at times.  Sludgehammer starts things off with an intense track with a great groove and cool middle guitar solo, riff section…  The vocal is very raw but pretty cool once you get used to him. A really cool way to start the record.  Clear sight, Fogged Mind starts with drums only and then the heavy riffs kick in and a short jam and the it is over and off into Ultimate Fuzz Octane which slows things down but keeps it really stoney and really raunchy vocal and totally like Church of Misery and also with some cool guitar. Yawning Sun settles into a more relaxed stoner rock mood and takes the aggression level down a bit and the band get a bit more spaced out, which is cool and the longest track at 9 mins. Wendigo is a really uptempo track with intense drumming as it slowly gets heavier and heavier until the spacey ending in a very short track. Brained Dead kicks the stoner rock back into high gear again and is quite groovy. Rogue Planets Galore is slow and intense and a wall of sound. Pulsar ends the record and might remind some of Kyuss and is one of the few tracks with longer guitar solo. I quite liked this one despite it being mostly just riff rock and hardly any guitar solos. The band has a really powerful sound and must be pretty cool live.

HTTP://www.oziumrecords.com
Posted by Scott aka. Dr. Space at 9:11 AM