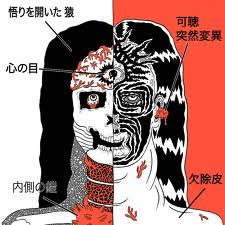 This release had been written about for about a year but it has finally arrived. It is pressed in 1000 copies, telling you how popular these bands are these days. I believe it was pressed in 4 colors, 3 in 300 and one color in only 100 copies. I got a red one. Side A starts off with the 11min Farflung track, Fade. It is very spaced out and has a pretty cool groove that really sucks you in as the space sounds swirl around your head and Tommy’s vocals penetrate your skull. It laters slows down and is a bit doomy but slowly builds up once again. Cool stuff and a nice journey… The White Hills track is 14mins long and starts off with some ringing bells that fades into a dark drone. It stays pretty far out with a lot of sounds and sound samples, drones, trippy segments, etc… I think a lot of people will be quite disappointed after hearing the Farflung track and hoping for some more high energy stuff but that is not what you get. A very special White Hills drone space out with a nice political message at the end. The artwork is pretty cool and tripped out with all the wording in Japanese.