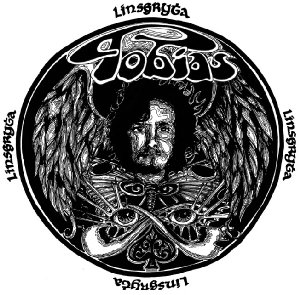 Tobias is the owner of the Kommun2 label and author of the bible of Swedish progressive rock music as well. He also plays in a number of bands including SKL and Aron’s Headband. This is a solo record that he made over the last year or more with some friends, including Anders and Henrik from On Trial. If you understand Swedish it is quite a political record. Many of the songs feature flute. Gula Solen is a short psychedelic rock track (See video clip). Israel is a political track but not nearly has hard rocking and with a bit more folky edge is the next track, Carl Gustaf. Drömmarna is a slow moody track with flute and heavier guitar. I Nordängen is a very cool instrument song with some trippy vocals and a dark feeling. Flip over the record for the the side long, title track, Linsgryta (translates to Lens Casserole!). This is a totally cool monster wah psych guitar freakout with some flute as well. The mid end section becomes more dreamy in a certain way. Damn cool record.