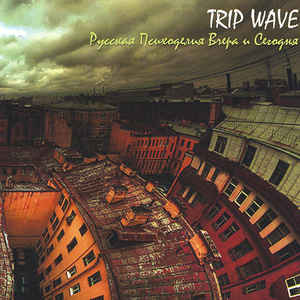 US based Trail records are back with another compilation CD of bands from Russia. Besides Ole Lukkøye and Polska Radio One, all the rest are new to me. Ciolkowska starts things off with a track called Below the Grass from their CD on R.A.I.G. records. IT has some really nice guitar playing and soloing in a slow building track. Very cool stuff. Rada & Blackthorn track features some throat singing and a lead female vocalist while the music has this dark and mysterious tone to it, brooding…  Later, there is a longer guitar section and the throat singing takes the lead and the guitar gets more psyched out.  This is a long 14 min track.  Bowl of Knowledge provide an unreleased track called Ganja Yoga! This is a slow moving track focusing on the expressive guitar playing. One strumming and one playing the melodies and lead parts.  Sonora had an unreleased track called Canyon featuring another female vocalist. This was a shorter track and not as interesting for me. Cosmic Triggers (also unreleased) plays a track called Syndicate. A sort of dark, eastern wah guitar and droney sounds give it a sort of brooding, evil feel. The keyboards add to this feeling and create a new psychedelic feeling to the song. Cool stuff. Ole Lukkøye provide a edited version (still the longest track on the CD at 15:28) of a track from their last album called Dyatly. Dead Man tell no tales (unreleased) perform Suicide Trip. This track is instrumental and starts with a hard rock riff and some intense drumming but this track did not grab me that much. After a bit of a journey, the band returns to the start riff and some heavier stuff at the end as the track speeds up. Kamni (unreleased) plays Forest Song. This is a dreamy song that reminds me of some of the 80s UK psych stuff. There is a really nice delay guitar solo. Beautiful. Polska Radio One ends the CD with the track, Shangri-La from their 2014 album.  The underground seems promising as all of these bands except Ole Lukkøye are quite young based on the pictures in the nice digipack. Cool compilation.

http://www.trailrecords.us
Posted by Scott aka. Dr. Space at 2:01 AM