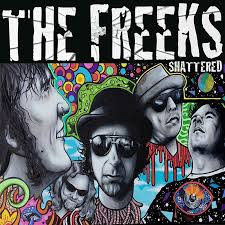 I believe this is the bands third album. I have only heard the first one a few years back and sadly missed their show in Denmark when Isaiah from earthless was touring with them but Ralph told me it was a fun and crazy tour. Anyway, this album features 13 tracks of wild garage rock stuff with a nasty vocal. I just can’t get used to the vocals. Ruben (Guitar, ex-Fu Manchu), Tom (Bass, ex-Nebula) and Jonathan (Guitar, ex- Angry Samoans) are all listed as singing but not sure who is the main vocalist? Esteban plays some keys while Bob Lee kicks out the drums.  The basic tracks were laid down on one day in April 2015 and then they did some overdubs in different studios to complete the LP. I guess they come and tour Europe next year?? We will see…   Anyway, this album has a lot of raw energy and with two rocking guitar players and some just good wild R&R vibes with the occasional dip into something more bluesy like Where did you go (I love the piano parts!).  Vocal sounds like old Alice Cooper on this one!  Sylvia is a bit more psychedelic. A fun album with great energy.


www.thefreeks.com
Posted by Scott aka. Dr. Space at 2:01 AM