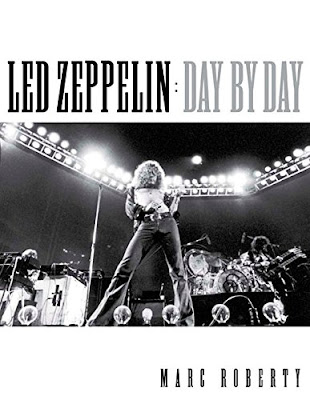 Writing any new book on Led Zeppelin must be a huge task as so much has already been written about one of the greatest rock and roll bands ever. The author has previously written a lot about Eric Clapton and is considered an expert. Instead of focusing on the rock and roll lifestyle of sex, drugs, and crazy stories this book follows the band day by day through every concert and includes the set lists where it was known for sure and provides speculation on what might have been played, when no known recording exists. This is quite easy to do in the early days but much more difficult later on when the band would change their sets a lot but then again, nearly all the later shows people made recordings of.  There are also small reviews from newspapers, and magazines for every concert that the author could hunt down. There are also some really great pictures of original posters, tour programs, and some concert photos as well. A complete discography including details on all the recent remasters and DVDs is also included at the end of the book.

I found the sections on the recording sessions to be very interesting.  I have to say I read the entire book in 3 days after receiving it and will for sure want to look out for some of the outstanding shows that are highlighted.

Some which I recommend based on the book are:

Here you can listen to them.      https://archive.org/details/ledzepbootlegs

Finally, It is pretty clear that 1975 was the last great year for the band and that by 1977 and 1980, the path the band had blazed was over and the shows were nothing quite like what they had played in the past.  A very cool book. It retails for 40 dollars.

http://backbeatbooks.com
Posted by Scott aka. Dr. Space at 2:04 AM