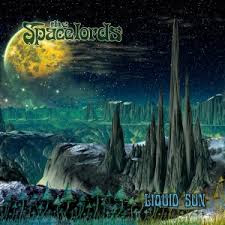 I quite liked this German bands last record called Synapse on the Sulatron label.  The band has switched over to another small new German label called Tonzonen (for the vinyl) and I am guessing that Space Temple is the bands own label for the CD version? Like the last one, this one is completely instrumental. This record was recorded completely live in the studio on March 6th, 2015 and mixed by the drummer, who also did the artwork, Marcus Schnitzler. Liquid Sun starts things off with a 13min track of guitar, bass and drums with space sounds floating over and across the soundscape as the band keeps it spacey and flowing. Eventually there is some really nice delay guitar work by Hazi.. Nothing too fancy or ripping just smooth and spacey playing. It builds up quite a bit at the end.  Spaceship Breakdown is next and features some synth parts from an ex-member and starts with some acoustic guitar. The track has some more dense synths than the previous track and the same slow stoney feel with nice delay guitars and smooth bass and drumming to allow everyone plenty of room to space out.  Eventually the guitar riff becomes much heavier and it builds up like the last track with a lot of heavy riffing and space sounds.  Black Hole is a 21min long track and it starts off spacey with some nice melodic guitar playing. The rest of the band eventually joins in and the track starts to build for a long spacey trip. The track ends in a pretty relaxed manner.  If you like spacey instrumental rock music you will dig this one. Nice record..