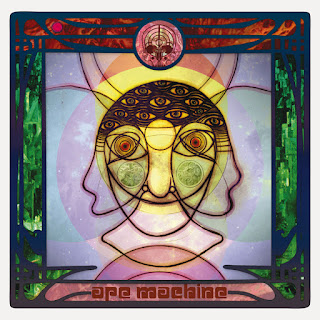 US band Ape Machine is back with a new EP to follow up their 2013 Mangled by the Machine on Ripple. They also released a live from Freak Valley album this year. Don’t mistake these guys for the Italian Ape Skull also on this record label. These Portland Oregon four piece retro rockers start off with the first of 6 tracks called Crushed from Within.  It starts off with a guitar solo straight away and reminds me a bit of Blue Cheer. These guys really like to borrow, steal, a lot of classic guitar lines. I hear them here and there a lot in their music but they make these songs their own and rock like hell. The sound production is quite special. A large open room sound on the guitar but a huge tight drum sound. Caleb is a passionate singer and he has a lot of space in this first very cool track. Disband has a lot of cool guitar parts and sometimes he sounds like a organ but Ian is best laying down the heavy riffs and solos, which he takes many short ones in this mid paced hard rock track.  Give what you Get reminds me a bit of Pentagram (the guitar riff).  A quick 3mins song. Under this Face has a familiar riff and groove but it is not a cover song. There are no keyboards listed on the CD so maybe Ian makes that sound with his guitar?? Ape’n’stein, is next and their unique take on the Edgar Winter classic, Frankenstein. The CD ends with Never my Way, a very Led Zeppelin inspired track, as the under 30mins passes quite fast. Check these guys out! They remind me a bit of the Danish band, Bite the Bullet at times.


http://apemachine.bandcamp.com
Posted by Scott aka. Dr. Space at 1:03 AM