I showed up about 19 and there were not many people about. It was not nearly as cold as yesterday as the wind had died down. I went to the back stage and talked a bit with Simon, the bass player from Kadavar, spoke to some of the guys from the Shrine and Satans Satyers as well.. Then Cory, he looked really familiar, the old drummer from Blues Pills, was there and it turns out he is filling in on guitar for Tom, who could not make this Horisont tour. He was a really cool guy.

The show was starting really early with Satan’s Satyrs starting already at 19:40. I had not seen them since 3 years ago when they played at Roadburn. I was surprised to see so many people I knew (Nils, Ole, Christina, Jens, Tiago, etc..). SS played a really short like 25mins set and played a lot of new songs like Two Hands, Geranium Bomb, and one more. I filmed Two Hands (See below). Sound was good.  They were pretty cool like Blue Cheer style rock and roll. Crowd wanted more but did not get it.

I was surprised that Horisont was next and not the Shrine but they were pretty fast to set up as all of the first 3 bands were sharing the drum kit and all the backline stuff for all the bands was already set up. Horisont opened with the Odyssey from the new record and this was the first time I had ever seen the lead singer have some synthesizers. He had a KORG MS20 that looked like an ARP Odessey. Never seen that design before. He also had a modern KORG. Anyway, they ripped through a short set with some new songs like The Night Stalker, Bad News and I think Ståder Brinner. They had a great energy and people were into it but for me, I really missed the 2nd lead guitar. Since Tom was not there, Cory, only did the harmony guitar parts but no solos so this put a lot of pressure on Charles. It was not the best I had seen them but they were tight and rocking!

The Shrine is a band that my friend Tom loves (where were you Tom??) and have played in CPH a few times but I had never seen them. They had their 3rd album out now and were funny and super cool guys from Venice Beach, CA… We got on well.  They played a great set. I was pretty blown away by them. Great sound (loud guitar!), cool songs.. Singer/guitar player reminded me of a young more punky Ted Nugent or something. He said funny entertaining stuff between the songs and played some mean guitar as well. I don’t remember the set and they did not have one written down but they blasted through a lot of short songs. The Vulture from the new record was really cool.  They were awesome.. 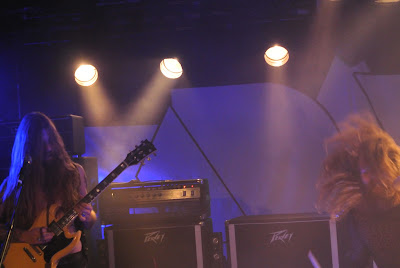 Kadavar made the audience wait a long time before appearing on stage. They came out and opened up with Lord of the Sky. They had the audience in the palm of their hand from the start and the sound was great and massive. They are so much more powerful live than on record, which really surprised me. The way they glided through the set though made me feel like it a bit too mechanical, too rehearsed, everything was just too perfect… They have been playing the same set every night for months, so it better be tight. They have the great rock and roll attitude, look and play fucking great but I missed some magic, some mistakes, some improvisation but it was pretty straight, very straight perfection until around ½ way into the show when they started to relax a bit and play a bit more. Black Sun and my fave song from the new record, Last Living Dinosaur, were really great.. Still pretty restrained. Anyway, what a monster drummer. They put him up in the front of the stage and I know why! He really leads and pounds the shit out of the drums. Amazing. He gives the band that extra kick.  It was about a 75mins set.. I spoke to them after the show as well. Cool people. I could have gone to the Lygtens Kro with them but it was already 12:30. They love to come and play here, they say.. It was a great night of rock and roll..

Encores: Thousand Miles away from Home, All our Thoughts, Come back to Life
Posted by Scott aka. Dr. Space at 4:51 AM