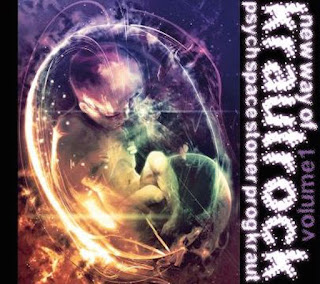 This is a new Germany Krautrock compilation series. This is the 2nd volume and features some great tracks and bands.  Ax Genrich starts things off with  a track called Livin’ in Germany. I was surprised at the intense vocals of this track and quite hard edge. Still rocking hard in his 60s! The Space Invaders are next with a track from their latest record called Dreadnought.  Pure space rock outthereness with an edgy guitar. Ad’ Absurdum (from Switzerland) have a track called Small Stone which is a pretty hypnotic and psychedelic track with some wild panning and guitar. Vibravoid provide a long live version of the Iron Butterfly classic, In a dada da Vida. Killer version. Space Debris really blew me away with Villamountain. Just amazing guitar playing on this one. Wow…  I am not at all familiar with the band Wide Scope but their track is called Shouting in the Desert and is quite spacey with a cool hypnotic ethnic vibe to it and some great guitar playing. The Pancakes serve up a really cool track called Man on the Moon from their 2007 Aquanaut record. The CD finishes off with Vintage Cucumber by Nachtfrau. This is probably the most chilled out track on the record with what sounds like a drum machine and just layers of spacey synths. Could be one guy?? Overall, this is a really excellent compilation! Great tracks..
http://www.radiosunrise.de
http://www.tonzonen.de


http://newwayofkrautrock.bandcamp.com
Posted by Scott aka. Dr. Space at 1:02 AM