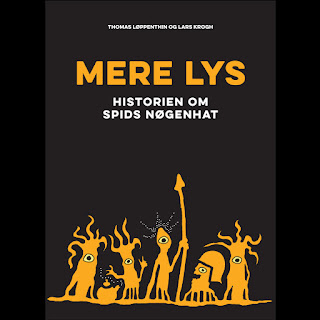 Spids Nøgenhat is a psychedelic rock band from Copenhagen. The group started off in the late 90s as a side project of the band On Trial.  Although the band has only made two studio albums and one live album, they have made a huge impact on the Danish music scene the past five years.  This book was written by Thomas Loppenthin and Lars Krough (Bad Afro Records).  The guys who make up Spids Nøgenhat, all except one were in the Danish band On Trial, so the first part of the book describes the early years and influences of the band On Trial, mostly written from interviews with the band members. I like that approach.  Inbetween the main chapters of the book are small portraits on each of the five members for the band, plus one on their all important visual and light person, Sebastian!

Morten Aron was the first to do a solo record outside of On Trial with his album Black Beacon from 1999, so they discuss his works and relevance to Spids Nøgenhat in the first chapter after On Trial. The first Spids Nøgenhat record was recorded in this time period as well and released in 2000. Next is of course, Baby Woodrose and the most prolific of all the On Trial off shoot bands by Lorenzo (Guf, Uffe). The side projects like Pandemonica, Aron, Ghost Rocket, Dragontears, etc. are discussed in another chapter.  There are a lot of pictures in this book and most I had never seen printed anywhere. The last two chapters of the book focus on 2010-2015 when Spids Nøgenhat started playing live again and really broke into the mainstream music business in Denmark, despite never becoming commercial musically.

I have known all of the guys in the band since the late 90s. I first saw On Trial in Dec 1997 and became friends with Henrik and Ralph. I had a record company called Burnt Hippie Records in the late 90s with Ralph and Henrik and one other and we released the On Trial- Psychedelic Freakout Party 2LP that is mentioned in the book but there is not a lot of details of this but this was really my baby, having gone through all the old live recordings to make up the record (presenting these to the band!), making the back cover artwork, doing the mastering with Lars Lundholm, etc.. I was very integral in making the record appear. This is not listed in the book at all but the release of the now rare record is!  Anyway, I learned a lot of stuff that I never knew reading this book (it is all in Danish, so it is slow for me to read). At the end of the book there is a nice discography listing all side projects including ones that Lorenzo only does a guest vocal on or produces. Overall, this is a great book but if you dont read Danish (Swedish or Norwegian) you probably won’t get a lot out of it… Great work Thomas and Lars..