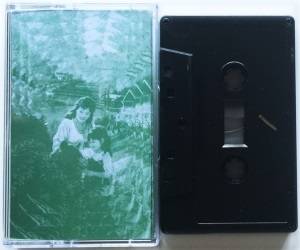 Another quite limited edition release from the Evil Hoodoo folks. Side A starts off with a really psychedelic track from the Cosmic Dead called Tembling Balls. Some spacey synths, and exploring drums start things off and then the guitar feedback and sounds slowly come into the picture. Eventually a repetitive synth vibrates and a constant kick drum goes along more or less in time as the others just space out completely….. It just slowly builds in intensity… Totally far out, as you have grown to expect from this band.

The Girlsweat side is something totally different and 3 shorter tracks.  Tape Worm Part 1& 3 is a quite low fi noisy track (dangerous in the headphones) with a really fucked up sound production. Mostly just a bass line and some far out electronics and a very noisy guitar. Scraper her Out features some quite tortured and mind bending vocals to make the music even more disturbing. The last track called Further Pluto, is for sure way out there.. This is one really fucking crazy sounding band.  They are in another universe!!

http://Evilhoodoo.bandcamp.com
Posted by Scott aka. Dr. Space at 1:03 AM