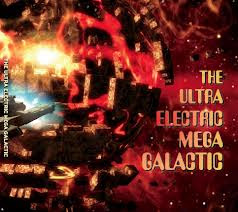 I have been waiting to hear this one for a long time. There have been songs here and there by Ed Mundell’s group floating on the internet but this is the first full length record and man, it totally kicks ass…. Sure, there is a similarity with Atomic Bitchwax (minus vocals) but there is more space and a different type dynamic, perhaps more variety. Let’s just get down to describe the record.. Unassigned Agent X-27 starts off with some strange sounds and a spoken word sample about space and then the bass line comes in but no real song kicks in just some spaced out guitar, backwards, highly effected and also drums and then they blast into Exploration Team. This track has a really cool bass and guitar line and groove interaction. You get hooked instantly! Get off my World starts off with a slow heavy distorted guitar, a bit Hendrix inspired and some really cool layers of psychedelic guitar. 7000 years through Time is one that I had heard before and it is quite short at just over 3 mins. Again Ed has found a fantastic rhythm section to allow him to create these layers of cool guitar that make is so spacey and it is perfectly mixed with the rock side!  The Third Eye is over 11 mins quite a Hawkwind inspired heavy space rock track. Super cool mind blowing stuff and super long guitar solos.. Rockets aren’t cheap Enough is totally different and more like one of the Atomic Bitchwax instrumental tracks. The Man with a Thousand Names starts off with a backwards drone, acoustic guitar, sitar and a totally spacey feeling. Later the track becomes a true raga with great interaction between everyone. Hello to Oblivion is back to the instrumental heavy rock groove with multilayer guitars (totally far out at the end). In the Atmosphere Factory is another track over 10mins where the band really shows their stuff. If you like psychedelic rock with killer guitar then you have to own this record. Ed has taken it to the next outerspace level with these great musicians.. Awesome stuff.. This is my favourite record so far this year..