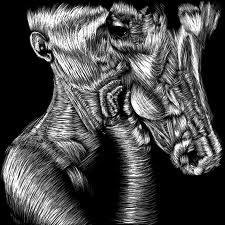 Sun Preachers are a new 6 piece band from France. The band play stoney, blues classic 70s style rock music. Spahn Ranch Campfire starts things and this song tells a strange story. The singer Nicolas is very hard to understand but he has a cool gravelly voice. Nice organ and big guitar sound on this track but no solos (very short organ) in this 5min track. In the Church of Blind Drunks, the Preacher is one eyed Man and it opens with a heavy riff. It is a melodic mid paced track with a great mood and some nice guitar and organ interaction. Nail King starts off as a slow blues track with a very low organ and a more in your face vocal and then it develops into a more spacey section that is pretty cool as the vocals disappear into a strange sound vortex and then the band get a bit psyched out.. Powerful.  Flip the record over and it starts with Mountain Queen and the Dirty White Man. It starts with a bit spacey keyboard which comes back and forth into the sound in the breaks. Singing is a bit like Pearl Jam at times on this one. A nice short wah solo is played in one of the breaks. Drift Away starts off as a mellow ballad but slowly builds up to something quite a bit more heavy. Nice arrangement. The record has a bonus track called Graveyard Blues. It starts with a spacey swirling organ and slowly strummed guitar riff. It gets heavier when the entire band kicks in and the vocals enter. Cool stuff. Some of this record reminds me a bit of a less intense Mystik crewe of Clearlight at times. This is a record about heavy riffing, powerful gravel vocals.. Crank it up or you will not appreciate it as well at low volume.

http://www.nasoni-records.com http://sunpreachers.blogspot.dk/
Posted by Scott aka. Dr. Space at 4:20 AM