This was the third to last show of the European tour and the bands were still feeling fine and rocking…. Johnny (Record Heaven) and myself were on the guest list and arrived a few mins before 22. There was maybe 100 people. I ran into the guys in Sinister Creation, Finn, Rhona, and Finn (Doom Finn) and his girlfriend and we had a chat. Nils, Tom, Sven, Magnus and the others would all come out later. The guys in Vitus and Mos Generator were hanging out so were easy to approach and talk to if you wanted. Wino was less available.

Mos Generator played a excellent set of hard rocking songs, with several from their new record, Nomads. These three guys have been playing together for like 20 years and have a real telepathy and they did some nice jamming. The band said they change the set every night and really like to mix things up and do some jamming. I really enjoyed the set. I don't remember all the tracks they played. I filmed two of them, the long jamming one is below. 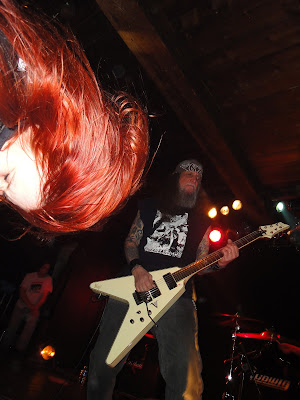 It did not take them long to remove the drum kit and St Vitus hit the stage pretty quickly, Nils and some of the others were not even here yet. The band was really LOUD but the sound was amazing and WINO was very intense and had been drinking pretty heavy, downing 4 glasses (3-4cl) of Jack Daniels (two in the 1st 3 songs!). They used one of the instrumental tracks from the new album as the intro and kicked direct into Blessed Night, the opener for more than a year now. The band sounded fantastic and very tight. They don't jam or improvise at all and play nearly the same set each night, which gives them the ability to smoke and drink a lot and they don't have to think too much about what do to as it is the same every night. That said, they are a damn powerful act and even and every song is powerful. War is our Destiny was played quite fast and the people in the front were going crazy… Quite a few fast songs were played int eh first part of the set. I was really surprised to hear them play Patra and The Troll. White Stallions really had the audience going as well. Last tour they were playing Mystic Lady in the set as well. The crowd was totally into and the band loves playing this club as the sound is so good on the stage and the people are right in your face so you can really feed on their energy. The encores were Dying Inside, a potent song about the evils of alcohol and then Born to Late… Everyone wanted more and the drummer hinted they had nothing to do before introducing the band before the encores but they are not flexible enough. Chandler was not going to play anymore.. I guess they played about 75-80mins.. Great show… 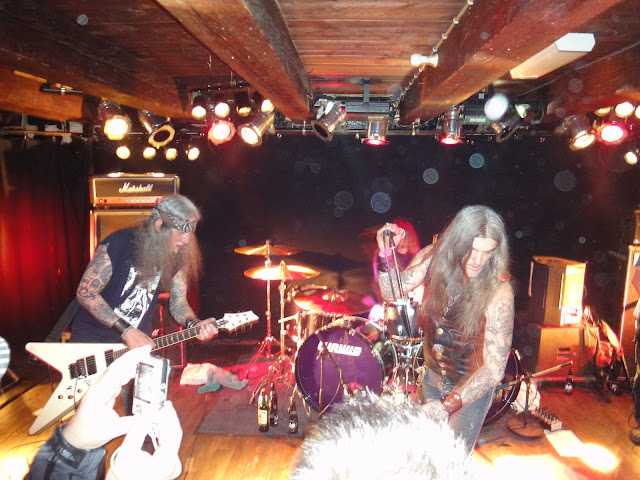 Set List: Blessed Night I Bleed Black, War is out Destiny, Look behind You, Let them Fall, Bleeding Ground, Patra, The Troll, Waste of Time, White Stallions, Thirsty and Miserable, Dying Inside, Born to Late
Posted by Scott aka. Dr. Space at 2:48 AM