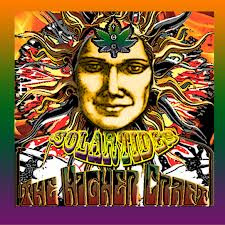 The UK psychedelic rock band, The Higher Craft, are back with a new 12 track, 54min CD. It is pressed in very limited quantities in a really unique packaging. While their last album, told a unique story through special objects and tarot like cards, this one is a different concept. It is a mix of some new material, some remastered material and live songs (from 2010,2011 and 2012).  The CD starts off with a quite a psychedelic start with the spacey title track, Solar Tides. Very dreamy. Flight Home is a longer track with some cool acoustic guitar and a strange dynamic with weird changes in the song. Quite far out. Travel unto Thee is also quite spacey with the sound of the ocean drifting through and the voice is a bit haunting at times. The more hard rock or heavy metal side of the band appears later in the track with some heavy riffs and a cool guitar solo. Can you see in the Dark is a short track with a electronic drum groove and is like really out of place and totally different than anything else on the record but I actually dug it. Window in the Water is an acoustic number with very beautiful free vocals. My Philosophy is another spacey acoustic guitar track also has some additional hand percussion and strange sounds going on, that would with the trip that was the Quest into the Stepping Stone age CD. Gateway (2nd Movement), originally appeared on an EP by the band. Lunar Tides closes the new studio material and next are some live tracks including the Lazy Daisy from the bands first CD. A big surprise was hearing the great Magic Mushroom band track, Magick Eye! Wow.. The version here is really heavy and quite hard to recognize as the MMB song. The Receiver is a very fast and intense track live from the Alchemy Festival 2012. The CD ends with a track called Terminator is a short spaced out far out spoken word electronic drone track of sorts.. Very interesting ending and pretty cool release.

http://www.thehighercraft.co.uk
Posted by Scott aka. Dr. Space at 11:11 AM