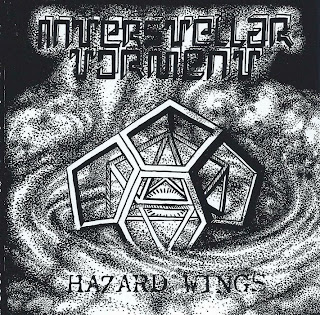 Hazard Wings is a new Finnish band. This release is digital and also a limited edition CD of only 100 copies. Check the bands bandcamp site below. The 8 tracks (35mins)  feature quite a few different people on the tracks. The opening track, Time will be my Grave is a high speed psychedelic space rock track with a crazy vocal but it really works. Bring New Horror starts off really spacey with a loud in your face synthesizer and guitar with a spaced out delay vocal. it takes many minutes before the track really takes off so you better be really stoned! Spaced out to the max… Death Machine is a very intense track and the guitar solo part just merges with the spacey sounds in a totally psychedelic way. Wow.. crazy stuff…  Tomb is a short track with spacey voices, a clanking sound like someone banging a cup against the steel bars of a dungeon  Bone Idols of the Desert Planet Parts I and II follow this track. The first part does not have any real drums to speak of and is really spaced out but has a really melodic guitar solo that is slowly swallowed but the space sounds and vocals before the 2nd part kicks in and gets strange. The clanking is back and a cool organ mixes with the strange sort of motion that is created with the track and spaced out vocal. Far out. Blind Horse/Castaway is a totally mad 2min space punk track. Kohti Reunaa ends this spaced out madness..  Some of this reminds me of bands like Chrome, Helios Creed and Pressurehed but more extreme and spaced at times and more low fi. Ok Chrome could also push the limits..

http://hazardwings.bandcamp.com
Posted by Scott aka. Dr. Space at 3:10 AM