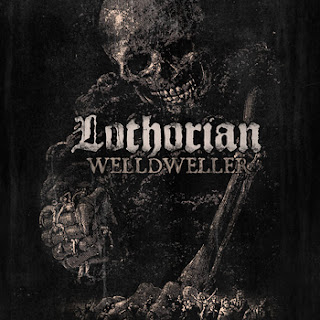 Lothorian are from Maaseik, Belgium and play slow evil stoned doom like Electric Wizard. This CD only release features 6 tracks (30mins) that are stoned and heavy. The opening and third tracks are both instrumental. Witchhunt has a slow fade in but is a repetitive heavy riffing track that really goes nowhere at all over it’s 4mins and has very little variation until a odd riff kicks in at the end and the two guitar players create a melody of sorts. The title track is next and starts off with the lyrics, “What is wrong with the world today, why are all the people insane”.  It starts with a very Black Sabbath like riff but moves more into a Sleep like territory when the vocals kick in and it actually speeds up in the break. Vocals are mixed in a quite special way which is cool. A short guitar solo also sneeks in on this really cool track. Atmosphere is listed as instrumental but it is not really as there is some sung vocals on this pretty straight track (not a lot of variation in the riff and track over the 3mins). Doomsday Calling has a mix of pre-recorded sampled stuff and real singing as they slow it down to a more doomy sound again. The track has a bit of a melodic thread to it but does not have a lot of variation, as they repeat things over and over and over. Wish they had taken it somewhere more interesting besides just speeding it all up at the end. Cult starts with a really heavy distorted riff and then the drums coming pounding in and then the track mixes up slow and fast sections. I am not too wild about the vocals though. Shallow Ground closes the CD. This one reminds me of Electric Wizard.. I could do with some more cool guitar parts though. Overall a pretty cool release..

http://facebook.com/lothorianband http://www.acidcosmonautrecords.blogspot.com
Posted by Scott aka. Dr. Space at 3:12 AM