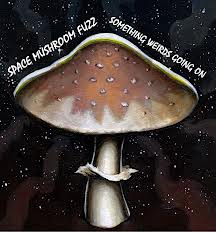 This Massachusetts based band have released their two cassettes (When the trippers Collide and Something weirds going On) in a cool double box. I think this is limited to 100 copies. Great packaging on this one. The first tape (Trippers) stars with the Palace Gates which is a really cool psychedelic acid space jam track. IT gets really spaced out at the end. Watching the Watcher very much has an old school Hawkwind vibe to it. The main riff is very much like Down through the Night. The guitar section at the end is really long and super spacey. Wonderful stuff..  Shine on your Crazy train Part 1 is the end of side A of the tape. This takes the way forward of Pink Floyd to a totally different level of space, way deeper than they could ever imagine…. Very floating, totally spaced out with loads of layers of guitar. Blew my mind this one.. Wow…  Flip the tape over for Space is Blue and the jam takes off in another direction with a keyboard line mixing with the spaced out sound and it reminds me of Psychedelic Warlords by Hawkwind! Funny.. Maybe you won’t hear the reference.. the way he sings?? Shine on you Crazy Train Part 2 is much shorter than the first part. It has slow building guitar with some cool bass playing and trippy delay guitars. Waveform Space Mushroom Jam ends this first tape with a really long spaced out jam piece. It slowly builds with some vocals far in the background as the track is mostly lead by the guitar riff. It later evolves into a a real guitar jam and some saxophone even.. Highly recommended music for the true space trippers… The 2nd tape has shorter jams and contains 8 tracks…. The opening track is a massive spaced out thing with a killer guitar part. Cool stuff.

If you dig bands like old Hawkwind, Troldmand, Cosmic Dead, Gnod, etc.. check these guys out..

http://spacemushroomfuzz.bandcamp.com
Posted by Scott aka. Dr. Space at 11:36 PM