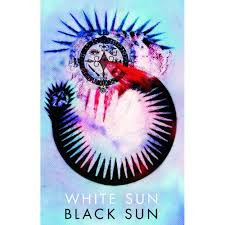 I don’t know where these folks are from (I think Italy) but it sounds like a three piece band thrashing out some hard edged psyche madness on the first listen. This cassette only (maybe digital download also) released features 7 tracks named after different planets, our moon, the sun.. The Sun starts things off with a noisy madness with some intense playing from all lead by the bass and drums to start while the guitar player freaks out. The vocals come in when the track settles down and then off they dash into the unknown creating quite a noisy sound. Tripped out stuff…  Moon has quite a fast pace as well and a groovy beat while over the top the guitar makes some different delays and effects rather than playing chords. Eventually he goes into a sort of solo mode, not like Earthless or Black Bombain, more noisy. Mars starts off more slowly with some slide guitar, noisy percussion and some additional layers of guitars and things..  Mercury has a killer drum and guitar intro that is really gets you hooked and then the tracks sort of goes strange but the bass player maintains the similar line and then they return. Pretty tranced out stuff. Jupiter is more strange stuff with some heavy reverb on the drums and percussion, bass and guitar meandering and a basic loss of direction as they head out to the nebula. Venus starts off with some distorted bass and the drums slowly build up as the guitar player floats around and tries to figure out what to play and then he finds out what he wants to do and raises the intensity level with some heavy riffing. Saturn has a gong and some feedback and oscillations to start things off and then the band takes off into a more like Hawkwind spaced out vibe and groove.. That is the end of this tape. All songs are repeated on both sides. Sure this stuff is pretty psychedelic but I did not find it all that interesting and the guitar player really needs some direction as the bass lines and drums are really great on most of this stuff but the guitar player seems disconnected. Check it out…..

http://whocanyoutrustrec.wordpress.com/
Posted by Scott aka. Dr. Space at 7:48 AM